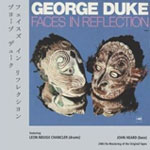 Keyboardist George Duke's career may have swerved towards pop and smooth jazz in recent years, but his mid-1960s emergence suggested a future as bright as contemporaries including Chick Corea and Herbie Hancock. Seminal work with renegade guitarist/composer Frank Zappa in the mid-1970s further cemented a reputation built on earlier recordings with violinist Jean-Luc Ponty, saxophonist Cannonball Adderley and vocalist Flora Purim. That he's chosen a more accessible route since then doesn't diminish the string of fine albums released under his own name during fusion's heyday, notably 1974's Faces in Reflection, originally issued by the German MPS label and now receiving a superb remaster/reissue treatment from the fledgling Promising Music.

Unlike larger outfits like Return to Forever and Mahavishnu Orchestra, Faces in Reflection is a trio effort, featuring powerhouse drummer Leon Ndugu Chandler (Herbie Hancock, Stanley Turrentine, Santana) and bassist John Heard, a name not well-known but a voice often heard in the company of artists ranging from Duke and Ponty to Count Basie and Bobby Hutcherson. With an arsenal of keyboards including acoustic and electric piano, and an array of analogue synthesizers, Duke delivers a fusion album that, had it received major label release in North America, would have easily rivaled larger scale albums from his peers. "The Opening" kicks the disc off with full force, a simple enough structure but one that gives Duke the opportunity to demonstrate that, in a Spanish-tinged modal format, he was every bit the equal of Corea.

Duke's virtuosity retains all the energy without the frivolous excess that sometimes marred other 1970s fusion albums. Clearly he understood the concept of fusing irregular meters, jazz harmonies and propulsive grooves, but in the context of memorable writing from which the trio could expand. He also had some of the meatiest synth tones around; flexible like Corea but with greater weight and, nearly 35 years later, zero "cheese" factor.

Duke uses his voice on the wordless "The Opening" and more relaxed funk of "Capricorn" years before artists like Pat Metheny began integrating wordless vocals into their music. A restrained reprise of the more expansive and relentless "Faces in Reflection No. 1" closes the album, with Duke's only lyric-based vocal of the disc.

Chandler's effortless ability to groove while retaining an equal voice in the trio is no surprise, but Heard's performance is an unexpected ear-opener. Playing strictly acoustic bass—but with the same lithe dexterity as Stanley Clarke—helps to defines the album's overall tone, and on the high octane "De Somba," he delivers a staggering solo that's but one of the disc's many highlights.

Faces in Reflection is one of a number of albums that Duke released on MPS. Coupled with Promising Music's plans to reissue the majority of that label's output over the coming years, the rest are sure to follow, including the more orchestrated Feel. Until then, Faces in Reflection is a reminder of just how inventive Duke was—and still is, since there's no less craft in his recent recordings, only a shift in emphasis.