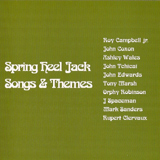 Named after a character from Victorian folklore, Spring Heel Jack (the English electronic duo of John Coxon and Ashley Wales) has vaulted across stylistic divides with the same ease that witnesses attributed to the legendary figure. Undergoing a gradual aesthetic transformation over the past decade, they have expanded from experimental drum 'n bass duo to innovators in a genre of their own devising: free-ambient.

Songs and Themes, their eighth album for Thirsty Ear Records, features another stellar cast, including trumpeter Roy Campbell and saxophonist John Tchicai. A dusky aural journey through soundscapes ranging from the pastoral to the urban, this is their most accessible and harmonious record to date.

Campbell and Tchicai ply mournful tones and lyric refrains from their horns across rich sonic landscapes, with Campbell as the primary voice. His tender phrasing on "With Out Words" sets the stage for the majority of the album, eliciting soaring cadences that drift effortlessly into the ether. Campbell and Tchicai engage in a melancholy but animated duet on the lengthy "At Long Last," warily navigating an ominous neo-classical setting.

Seamlessly blending textural dissonances and rubato rhythms with aching lyricism and bittersweet harmonies, Song and Themes offers a level of emotional commitment and structural sensitivity that other electro-acoustic artists can aspire to.