By Mark Corroto
November 8, 2019
Sign in to view read count 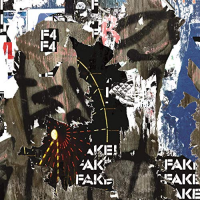 If you count their three download-only releases from 2016, F4 Fake by Ken Vandermark's Made To Break is the band's ninth release since forming in 2011. This is significant because like his quintet Vandermark 5, which existed from 1996 until 2010, this quartet and his ensemble Marker are the main drivers for the trailblazing composer. Not to say his solo work and duos with musicians such as Paal Nilssen-Love, Nate Wooley, and Tim Daisy aren't also growth rings in his musical tree.

Made To Break has a freshness not unlike that of 1970s electric Miles Davis music. Like Davis, Vandermark colors outside of the jazz lines including funk, electronics, Ethiopian esthetic, and contemporary classical music. And like Miles, he is an artist of his time, drawing inspiration from painters, writers, movie directors, and the DIY rock to which he listens. The lineup has remained stable for most of the band's existence with Vandermark (reeds), fellow Chicagoan drummer Tim Daisy, Dutch electric bassist Jasper Stadhouders, and the Austrian electronics wizard Christof Kurzmann.

The stratagem Vandermark employs with Made To Break is the deployment of modular compositions that can be summoned by any player at any time. It is as if this were a Butch Morris conduction where the baton was shared. Each player has a catalog of the band's music and can call upon passages for the group or in duo with another musician. "Aäton (For Orson Wells)" motors along with an infectious groove and Vandermark's tenor saxophone siren before Kurzmann muddies the waters with sampled horn metamorphosed by way of his software manipulations. From there, Kurzmann pushes the sounds into hyper space, Vandermark swaps to clarinet, Daisy abandons drums for objects and Stadhouders jettisons his timekeeping for some shred. But wait, there's more. After Daisy reclaims his drum kit and solos, the quartet circles back to a heavy pulse and tenor-led groove, only to end with some electronic ambiance. The remaining two tracks follow suit and open up the potential for surprise. Just as Miles Davis rejected head-solo-head approach to written tunes, Vandermark opens up the possibilities of each piece of music Made To Break presents. F4 Fake finds the band in full flight.