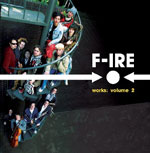 The inventions and glories of London's F-IRE collective have been well documented here this year, and several tracks on this double-disc set—pieces like Polar Bear's "Fluffy (I Want You)," Acoustic Ladyland's "Remember," and Julia Biel's "Where Is She Now?"—revisit the highlights. The album also serves up a heap of new material, most of it from CDs to be released later this year or during '06.

So what future treats are coming our way? Plenty, if these advance tasters are anything to go by. Among them are two very different projects from Ingrid Laubrock, which the saxophonist flagged up in her recent AAJ interview. "Sonic Snapshot" is from her soprano/piano duo collaboration with Liam Noble, featuring (mostly) "standards with a twist"—and anyone who caught the duo's Tristano/Monk/Mingus set at the Vortex a week or so ago will vouch for the twists—due for release in the New Year.

"Say Anything," which closes the second disc—for the probable reason that it would be impossible to find anything else more out and more thrilling to follow it—is from Laubrock's project with her Polar Bear colleague, electronica artist Leafcutter John. It's truly extraordinary, mind-bending music, with Laubrock all over every tonal and textural inch of the tenor, from the opening foghorn-like bass register sounds up through harmonics hyperspace; Leafcutter John tools realtime-software, morphing electronically-mutated kalimba, melodica, bouzouki, bowls, and gongs alongside her. It's like listening to the creation of a new sonic language in which the two musicians are already achieving dialogue and having fun. Astonishing and liberating. An album should be released sometime next year.

If '05 has been a wonderful year for the F-IRE collective, and we the audience, on the evidence of this sampler, '06 sounds like it's going to be every bit as good, if not even better. Bring it on!