Stu Goldberg: Eye of the Beholder 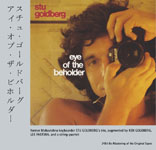 The measure of an artist's worth is his entire oeuvre, not simply a specific moment in time, a particular group or a single release. Still, while keyboardist Stu Goldberg never made the name for himself that he should have as a member of John McLaughlin's mid-'70s Mahavishnu Orchestra and late-'70s One Truth Band and as a sideman on drummer Alphonse Mouzon's powerfully eclectic Virtue (MPS, 1977), also recently reissued by Germany's Promising Music, the pianist's Eye of the Beholder (MPS, 1982) was an album that, had it been released Stateside, might well have given him the boost he needed. Not that he's not remained busy, releasing albums including the more World Music-centric Dark Clouds (Dedication Records, 2006), with tablaist/vocalist Cassius Khan and vocalist Lauren Goldberg, but listening to the work he did between 1975 and 1985 it is almost criminal that he never received greater accolades.

Eye of the Beholder will come as a surprise to fusion fans, being all-acoustic and sporting a string quartet on a number of its six Goldberg originals. But the writing is vibrant, and the arrangements for an expanded trio (bassist Jim Lacefield and drummer Dave Crigger—who may be working an acoustic trio here, but plays with a fusion attitude like his life depended on it) that also includes saxophonist/flautist Ken Goldberg and percussionist Lee Pastora in addition to the string quartet, burn with the same kind of energy with which fusion fans of Goldberg will be familiar.

The title track opens with a gospel feel, a mid-tempo piece of funk accessible yet so full of life and energy that it evokes an acoustic Brecker Brothers feel, right down to Ken Goldberg's screaming tenor solo. A recent discussion at the AAJ forum was Funky Acoustic/Double Bass, and Lacefield's tone and demeanor are nothing short of get-down. The aptly-titled "New Love" is gentler fare, Goldberg proving himself as lyrical as he is virtuosic. "Song Burst," on the other hand, begins almost pastorally with the string quartet, Lacefield's arco and Ken Goldberg's flute, but quickly morphs into a fiery, optimistic-sounding burner that gives Stu the opportunity to demonstrate his not inconsiderable chops as the tune turns modal for his solo.

But as is the case with other songs on the disc, including the Latin-esque "Daybreak, Sunbeam," these are no mere head-solo-head compositions. Instead, Goldberg has written a number of tunes that are episodic in nature yet hang together despite their sometimes abundant wealth of musical ideas.

Perhaps the most revealing and prescient tune on the disc is "Daybreak," which begins with the same piano motif as "Daybreak, Sunrise" but, as a solo piano feature for Goldberg, turns more impressionistic and harbingers more recent work. Throughout, as democratic as Goldberg is as a leader, there's no doubt who shines the most. Eye of the Beholder is an album that should have garnered Goldberg significant acclaim; perhaps this beautifully remastered reissue will do what the original didn't.