By Edward Blanco
November 25, 2005
Sign in to view read count 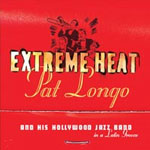 Salsa it's not, but Pat Longo and his Hollywood Jazz Band deliver a Latin-flavored hot big band sound with shades of Kenton on Extreme Heat. It blends great writing and arrangements with a fiery performance from a star-filled ensemble to produce a unique Latin jazz experience. To the discerning jazz fan and aficionado, a glance at the arrangers on this album should provide a clue at how good the music is. Pat Longo borrowed the talents of Gary Urwin, Bob Florence, Bill Armstrong, Buddy Childers, and Kim Richmond for this task. As for the band, Longo brought together the usual West Coast luminaries, like trumpeters Carl Saunders and Wayne Bergeron, trombonists Charlie Loper and Andy Martin, saxophonists Pete Christlieb, Dan Higgins, and Kim Richmond, plus many others.

The Latin rhythms and sizzling solos throughout the eleven tracks result in the kind of music you want to move and shake to. While most of the music is Latin in style, you can't help but hear the Kenton/Gillespie influence of the first two pieces extend to the other tunes. The opening Dizzy Gillespie classic "Manteca" is a loud, percussive, and trumpet-filled number featuring a wonderful solo by Carl Saunders that would have made Dizzy proud.

If you've ever heard Kenton's "Artistry in Rhythm," you've probably never heard it quite like this before. It's one of the best renditions of this standard ever recorded. "In a Samba Mode" is a lighter melodic piece arranged by Bob Florence. The George Gershwin tune "Rhapsody in Blue" actually has little or no Latin beat to it at all, played instead in a jazzy bebop style. One piece with a hot Latin beat that you'd expect to hear is "Summer Time Down South," in which the band cooks with a blazing solo from trumpeter Bill Armstrong.

Richie Gajate-Garcia shines on percussion in "Calvera," another hot Latin chart. The pace slows down for the movie tune "Black Orpheus," a short ballad that highlights the soft trumpet play of Armstrong. One of my favorite cuts on this album has to be "Samba De Beach," a brassy number where the woodwind section comes alive together alongside a fine piano run by Christian Jacob. For this listener, "Rise" just does not seem to rise to the level or caliber of the other numbers. "With All The Bells & Whistles" and "Lullaby of Bigfoot" are two jazzy big band numbers with no real Latin slant to them, but nevertheless they make a fine finale.

The Pat Longo Hollywood Jazz Band makes a compelling big band sound with some vibrant Latin tones that are guaranteed to cuase involuntary bodily movements of the hips and shoulders. If not, check your pulse.