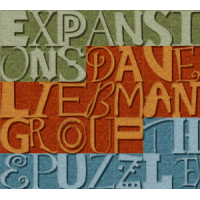 NEA Jazz Master saxophonist Dave Liebman has kept his music alive and generative for five decades with a prolific recording output, forming signature groups that push the musical envelope, and advancing new ideas within time-tested parameters. His current group, Expansions, allows him to interact with younger musicians, both as a mentor and as a way of exposing his creative impulses to new influences. "Young" in jazz doesn't always mean newcomers— these guys are consummate and seasoned players, and they love to explore novel possibilities. And Lieb's old standby, bassist Tony Marino, is no spring chicken. On this, their second release, following Samsara (Whaling City Sound, 2014), they take paradoxical, incomplete musical statements (instead of basic melodic lines) and see what they can do to live in the uncertainties or sometimes to resolve them. It's an idea that goes back to J.S. Bach, it is a noble part of the jazz tradition, and it may be why the album is called The Puzzle.

That process is exemplified in the title track, "The Puzzle," which starts out as a series of banged out dissonant chords with an offbeat syncopation by pianist Bobby Avey, a statement which is then woven into a series of deviating blues improvisations by Liebman on soprano saxophone, followed by Avey's Debussy-like piano etude that evolves into an upbeat improvisation that gains in intensity and leads into Matt Vashlishan's alto saxophone bebop references. But the piece ends with giant step intervals that deconstruct the mainstream effect, leaving the listener puzzled. The styles change in a zig-zag fashion with each chorus, which has the effect of a Zen koan: think -but don't think.

The one exception to this dynamic is a lively version of the Tadd Dameron standard, "Good Bait," which is improvised "in the old fashioned way" with trading choruses and a straight-ahead rhythmic pulse. It is sheer fun and a nod to the bygone time when you could just snap your fingers, relax, and enjoy the swing.

The concluding track, "Danse de la Fureur," is based upon a movement from Olivier Messaien's Quartet for the End of Time. As arranged by Liebman, it becomes a contorted, twisted apocalyptic fall into the darker regions of the underworld. It goes wild with sonic effects that make the surprises and shocks of the rest of the album seem mild by contrast.

On first listening, this album disturbs the listener's expectations in ways reminiscent of "free jazz" -an unfamiliarity stemming from a lack of expected structure. But after a couple of replays, the enjoyable feeling of familiarity appears. This is because of a not-so-carefully guarded secret of Dave Liebman. As far out as he goes with his advanced excursions, underneath there is always the anchor of the blues and the pentatonic scale of impressionism and the American Songbook. Add more than a touch of Monk, as this album does, and you're back home in your comfort zone.

Hat Trick; For J.A.; Vendetta; Good Bait; Sailing; The Puzzle; Off Flow; Continues to Ignore; Off and Off; The Thing that Wouldn’t Leave; Danse de la Fureur