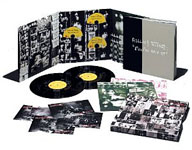 A magnificent spontaneity permeates The Rolling Stones' Exile on Main Street, so much so that it resists dissection by expansion of its various repackages.

The remastered album, in its original eighteen-track form, reaffirms the bedrock strengths of a work that as a whole is far greater than the sum of its parts. For instance, it's not necessary to hear the rhythm guitar more clearly—distinct from the slightly less garbled singing of vocalist Mick Jagger on "Rocks Off"—to know that the lynchpin of the biggest and best Stones lineup ever remains guitarist Keith Richards, bassist Bill Wyman and drummer Charlie Watts. The rhythmic force of their unified playing is no less powerful when virtually subliminal, but "Title #5," on the album of rarities, features just those three in an abbreviated reminder of their visceral expertise.

The remainder of the ten rarities tracks—exhumed from the archives under the auspices of producer Don Was, Jagger and Richards—reaffirm the continuity of the official sequence of cuts, within which there is no truly great tune comparable to "Gimme Shelter." "Good Time Women" sounds like nothing so much as a rewrite of "Tumbling Dice," while an alternate take of "Loving Cup" demonstrates just how much versatility The Stones derived from the judicious addition of trumpeter Jim Price and saxophonist Bobby Keys—not to mention the lyrical yet earthy pianistic of Nicky Hopkins, the instrumental counterpart of guitarist Mick Taylor, who joined the band from John Mayall's Bluesbreakers, upon the death of Brian Jones .

Hearing Richards sing "Soul Survivor" is a revelation, and not just because of his persona; it's a microcosm of The Stones' most coherent personal statement. The decision to add vocals and instrumentals to unfinished recordings is suspect, especially when "Following the River" sounds so much like latter-day Stones in its too-careful approach to production. But Jagger's world weary yet derisive singing on "Dancing in the Light," and especially "So Divine (Aladdin Story)," are reminders of the qualities that make him a truly singular figure in contemporary rock.

Besides a low-priced Target exclusive of the Rarities CD, a deluxe offering includes memorabilia and a vinyl version of the album (originally two LPs), as well as a book that vaguely documents the story of the band's sojourn to France, where they recorded the bulk of the sessions. Photos of the remote recording location, plus text recollections by the musicians, prompts no little wonder about how The Rolling Stones captured so many fleeting moments of inspiration in such a dingy environment.

An abbreviated DVD contains trailers from the 2010 Stones in Exile documentary, and 1973 concert film Ladies and Gentlemen: The Rolling Stones concert film, further alluding to the ways and means involved in the evolution of this music, while in his well-wrought essay, Anthony DeCurtis touches on every pertinent point relevant to this rock milestone. To his great credit, the author resists the temptation to explain Exile on Main Street, the ineffable mystery of which endures nearly four decades after its 1972 release.