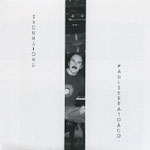 All the music on Paul Serrato's latest excursion is original, except for the Miles Davis tune "Nardis." While the pianist brings in Latin and Brazilian rhythms to add flavour, he navigates mainly in the mainstream and brings along a tidy band to help him along. They get off to a fine start as "Transversal" lights a sparkling path helmed by Reggie Pittman, who plays the trumpet with distinction, exploring and coming up with some strong ideas that go to swell a tune. Serrato takes a lighter line that cavorts and with the congas and drums, adding a liquid base, and the tune makes for happy listening. The drive into hot climes comes through "Summer Blues," a punchy, loping number and another tune that gets its impetus from Pittman.

Brazilian jazz makes for a strong voice that comes in the three-part suite, each part written at a different time and manifesting a distinctive aspect of the music. Conguero Henry Morales, whose layered patterns shape the concepts impeccably, makes it all the more striking. Serrato establishes the tone on the swaying "Central Station Bossa," the rhythm nestling comfortably in the groove he sets up. The mood calms on "Blues in Rio" as Pittman picks up the flugelhorn and brings in a softer tone. And then it's back to the punch as "Assim E" dances in, the beat never letting go of its heady pulse.

They end well enough with "Mayan Moon," introduced by the funky whorl of the bass and congas before the long shimmering lines of the trumpet give it a different cast and it rises to a thundering climax. The effect is quite stunning and makes for a perfect finish to a pleasing album.

Visit Paul Serrato on the web.