By Eyal Hareuveni
August 25, 2006
Sign in to view read count 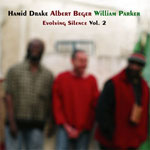 Evolving Silence, Vol. 2 follows a year after Vol. 1, which documented the first ever meeting in the studio of Israeli saxophonist Albert Beger and the great rhythm section of William Parker and Hamid Drake. This disc was recorded a day after an unforgettable performance by trumpeter Roy Campbell's Pyramid Trio on which Beger was featured as a guest player, on the same day as the first volume.

Like its predecessor, this album features four different perspectives: three original compositions by Beger and one free improvisation with Beger and Parker. The close musical affinity of the trio's members—and their religious, zen-like, egoless attitude—is still present, marking one of Beger's finest appearances on disc. With Parker and Drake's spiritual, modest playing and their openness and embracing compassion, there is no way but to take off. It's clear that Beger, in his body and soul, was ready for such an opportunity.

The opening track, the thirteen-minute "Evolving Silence," begins with an intense, two-minute duo segment with Parker and Drake, and only then does Beger add his percolating tenor sax and lead the trio through alternating themes. Beger leaves Parker and Drake for short, muscular interplay, and then brings this piece to a safe harbor. "Duo # 3," a free improv duet between Beger's alto flute and Parker bass, begins with Beger talking through his alto flute and ends as kind of a ceremonial tribal duet. "Funk Lacy" is indeed a sweeping rhythmic masterpiece.

The closing "Skies of Israel" is a beautiful and poetic piece that features restrained arco playing by Parker, gentle, crying lines by Beger, and spare and imaginative drumming by Drake—sounding in these painful days like a humble plea for peace and humanism, in the same vein that this great trio explores throughout. Warmly recommended.