By JEFF STOCKTON
October 16, 2005
Sign in to view read count 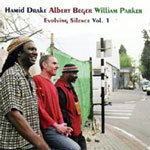 The Wyman and Watts of jazz, bassist William Parker and percussionist Hamid Drake, traveled to Israel to perform with Roy Campbell in the Pyramid Trio in February, 2005. The next day, after having sat in with the band, Israeli saxophonist Albert Beger recorded his own trio session with Parker and Drake in the studio. The resulting Evolving Silence Vol. 1 is just a taste: four tracks across 42 minutes. But each composition stands individually to represent a different aspect of Beger's blend of free jazz and Middle Eastern lyricism (along with the unquestionable spiritual authority of his bandmates) and the recording is vivid, crackling with immediacy and brimming with soul.

"Naked Truth opens with a serene invocation from Beger on tenor, then transforms into an improvised burner as Beger overblows with rising intensity. After Parker and Drake play furiously, the tenor comes screaming back, concluding decisively before a tranquil coda. Two duets occupy the midsection. The first, for alto flute and bass, is the session's most visceral performance, with Beger drawing audible breaths and Parker's repeated plucked motif in support. The bass responds quickly to slight changes in tempo before answering Beger's percussive flute pops with a bouncing bow. The second, for tenor and drums, is in the style of Coltrane's "Countdown ; Drake's loose-limbed double-timing seems to inspire torrential sheets of sound from Beger as he runs up and down his horn.

For the final track, "Rain Is Coming, Parker switches to the doussn'gouni (West African hunter's harp) to evoke the eternal flow of the Nile and Drake handles his shaker as if he were running his fingers through wooden wind chimes. Atop Drake's hi-hat shimmer and stick taps as light as brushes, Beger blows a gorgeously meditative melody before finishing with a soft chant of "shanti, shanti. Peace out.

We already know what Parker and Drake are capable of, whether leading their own groups, playing as sidemen, or simply supporting each other. With any luck, Albert Beger's capabilities will become even more apparent and impressive on Volume Two.