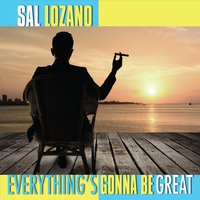 If you're looking for a superlative one-man saxophone section, better call Sal (Lozano). And if you need some dazzling charts to make that section shine, better phone Tom (Kubis, that is). After spending years as one of Southern California's leading sidemen, Sal Lozano has at last recorded an album under his own name, one on which he literally becomes the entire sax section by overdubbing soprano, alto, tenor and baritone parts. To further ensure its success, he has called on longtime friend and colleague Tom Kubis to compose and arrange every number, a decision that can be summed up in two words—smart move.

The result of their collaboration is an album that is consistently bright and melodic, swings with abandon and never fails to entice the ear. As leader, Lozano sets aside ample solo space for himself, improvising eloquently on soprano ("Graduation Waltz," "Bar B Que"), alto ("Beat Down and Broken Blues," "A New Sheen on Shine"), tenor ("Hey Sal, Get Your Soprano Out!") and even flute ("Maraba"). He does not, however, own the spotlight, welcoming aboard a number of guest soloists to help brighten the voyage. Lozano also has the good sense to employ a world-class rhythm section: pianist Tom Ranier, bassist Trey Henry and drummer Ray Brinker, a trio of savvy pros who are invariably enterprising and supportive.

Lozano's guest soloists are trumpeter Ron Stout ("I Love Sax," "Romance," featured on "Still"), tenors Kubis ("Hey Sal," "Romance") and Dave Moody ("I Love Sax," "I Wanna Hear Beer!"), guitarist Mike Higgins ("Beat Down and Broken Blues," "Beer!"), baritone Brian Williams ("Beer!"), alto Rusty Higgins ("A New Sheen on Shine"), trombonists Andy Martin ("Takin' the A Sax," "You Say Partido, I Say Perdido"), Alex Iles ("Bar B Que") and Charlie Morillas ("There'll Never Be Another Sax"). Ranier solos on "Graduation Waltz," "Takin' the A Sax" and "There'll Never Be Another Sax," and percussionist Joey De Leon amplifies the rhythm on "Maraba" and "You Say Partido." While it may be uncalled-for to single anyone out for praise, Rusty Higgins is especially impressive dueling with Lozano on "A New Sheen," as are Stout on "Still," Martin on "A Sax" and "You Say Partido," Morillas (and Ranier) on "Another Sax."

Everyone (including Lozano) has to be on his toes, lest Kubis' exemplary charts steal the show and their thunder. After nearly three decades writing memorable themes for his own big band and countless other groups, Kubis still seems to have an endless reservoir of fresh and exhilarating ideas at hand, ready and waiting for the next aspirant who comes to call. Such is the case here, as Lozano, Kubis and their teammates leave no lingering doubts that Everything's Gonna Be Great (in fact, it already is). A sharp and spirited album that fairly shouts for an encore.

I Love Sax; Graduation Waltz; Hey Sal, Get Your Soprano Out!; Beat Down and Broken Blues; Maraba; I Wanna Hear Beer!; Takin’ the A Sax; Romance; You Say Partido, I Say Perdido; Bar B Que; A New Sheen on Shine; Still; There Will Never Be Another Sax.