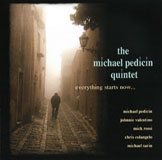 "To my friend, Michael Brecker, the ruler of it all.. I miss you." That is the last line of Michael Pedicin's dedications on Everything Starts Now... and it is the key to the whole date. Although Coltrane runs deep, the Philadelphia tenor man's formative years (Pedicin studied with Denis Sandole, an instructor of Coltrane's), the love Pedicin has for Brecker and Brecker's sound is palpable throughout the disc.

It's a coin flip as to what Brecker's greatest accomplishment was: the signature sound that has inspired so many young players; or his ground-breaking work with bands as diverse as the Brecker Brothers and Steps Ahead. Brecker, who was born in Philly and raised in nearby Cheltenham Township, effortlessly integrated non-jazz influences into his music, serving consistent helpings of tasty post-bop jazz that never shied away from rock or R&B. Pedicin—with the help of Johnnie Valentino, who wrote all but one of the tracks here—takes that recipe and cooks up a delightful disc that values texture and nuance.

"Pelican" is soft but urgent, a subtle tune that has elements of surprise. That pattern repeats itself throughout the date. This band doesn't want to blow you out; it wants to lure you in. There are moments where the players seem to splinter off, as in the slightly fractured trade-offs on the urban "L.A. to Philly" or Rossi's Monk-like solo on "Concatenation." However, the accessible, welcoming groove that the unit establishes early is a constant companion on Everything, and Pedicin's evocative tenor becomes an old friend very quickly.

Valentino's guitar has just enough steel to remind you of John Abercrombie, especially on the funky-but-steady "Contours." He can dial it back, though, which brings an antique feel to the bopping "Later"; his writing never dials back though, giving the rest of the band fertile ground from which to grow some outstanding music. Rossi's comping is almost as intriguing as his solos, and he makes a fine counter-voice when Pedicin and Valentino are flying formation on "L.A. to Philly." Drummer Michael Sarin keeps the electricity steady, whether its his autumn-leaves brushwork on the suite-like "After the Rainbow is Over," or the martial drumbeat on "Contours," that the rest of the band climbs on like ivy around a building; bassist Chris Colangelo puts a thick groove on the march, and he's a great foil for Sarin on every track.

Pedicin's soulful moments are as effective as his crackling ones: He takes total command of the spiritual "One of Us" (written by Eric Bazillion, another product of the Philadelphia music scene), "Another Day" is a soulful ballad that combines the feeling of loss with the need to keep on going, and the meditative title track carries that theme further, evoking the 1970s chestnut, "Today is the first day of the rest of your life." In the end, even with the sadness inherent in Michael Brecker's passing, the fact that sharp, dedicated players like Michael Pedicin still keep that sound going is a gift Brecker gave to us all.

Pelican; This Way Out; L.A. to Philly; One of Us; Contours; After the Rainbow is Over; Concatenation; Another Day; Later; Everything Starts Now.