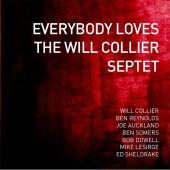 To name your debut album with a knowing reference to the titles producer Orrin Keepnews gave to breakthrough releases by pianist Bill Evans and guitarist Wes Montgomery—Everybody Digs Bill Evans (Riverside, 1958) and The Incredible Jazz Guitar Of Wes Montgomery (Riverside, 1960)—takes either a lot of nerve or a very British touch of self-deprecating humour. Everybody Loves The Will Collier Septet suggests a bit of both, but the good natured, playful nature of Collier's music tips the scales in the direction of humour.

The album is released as part of the "F-IRE Presents" series initiated by London's F-IRE Collective, the aim of which is to release and promote works by friends of the association. Instrumental in giving bassist Will Collier's band its opportunity was F-IRE founder member Seb Rochford, drummer with the wonderfully singular Polar Bear and the outrageously iconoclastic Acoustic Ladyland, and a key member of a host of ranking bands including saxophonist Ingrid Laubrock's post-Forensic (F-IRE, 2004) touring quintet. Rochford came across the Collier group on MySpace in 2006, recording sessions took place in 2007, and Everybody Loves The Will Collier Septet is the result.

All but one of the 10 tracks on the album, tenor saxophonist Ben Somers' "Gambit," were written by Collier, who offers a winning mixture of strong melodies, infectious grooves, nods to Terry Riley's reiterative minimalism, an occasional wink at the Penguin Cafe Orchestra, and assured four part horn arrangements. Most of the tracks last around five minutes or less, and are concerned with pre-composed structures and counterpoints rather than with providing platforms for individual soloists. The exceptions include "Gullibility Veil," "Wade" and "Environmental Complaints," which respectively showcase alto saxophonist Mike Lesirge (whose kwela-inspired solo evokes township jazz saxophonists Dudu Pukwana and Gwigwi Mrwebi), trumpeter Joe Auckland and pianist Ed Sheldrake.

It's engaging, goodtime music which as the album progresses suffers, just a little, from a feeling of compositional sameness. The most memorable tracks are the aforementioned "Gullibility Veil," "Fat Clown" and "Roundabout Politics," each of which has a distinct character of its own. "Fat Clown" takes off with deliciously gauche and comedic trombone and tenor saxophone interplay, followed by a dialogue between Ben Reynolds' martial drums and Auckland's wow-wow trumpet. The track simultaneously suggests composers Kurt Weill and Charles Mingus. "Roundabout Politics" has Middle Eastern/North African melodic resonances.

Live, the Collier Septet's good humour and enthusiasm makes the band hugely enjoyable. On disc, heard in a one-on-one domestic context, the music would benefit from more conscious pacing and greater use of light and shade. That said, Everybody Loves The Will Collier Septet is an auspicious debut.