By HENNING BOLTE
October 26, 2017
Sign in to view read count 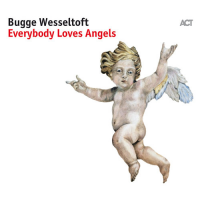 Energy flows in different ways, finding its specific ways into tonal, musical expression. The music of this album is quiet, and unfolds gently and clearly, without any rush or sensational attention catching orchestrations. Every single tone falls into its genuine mold and among those independent entities concordances arise without blending. The album is a highly personal retreat into the memory of significant musical experiences and awakenings from decades ago.

The music took shape at Lofoten, a significant place for Bugge Wesseltoft; the birthplace of his grandfather. It was recorded at LofotKatedralen in February of this year by Asle Karstad, one of the most sophisticated Norwegian recording engineers. Wesseltoft chose 11 songs, most a prominent part of our collective (musical) memory, songs with strong, memorable melody lines like "Angel" by Jimi Hendrix or "Let it be" by Paul McCartney. Wesseltoft's meditative journey into the core of every song should and will enable listeners to re-imagine and dive into their own reception of the songs and lose themselves in its beauty, illuminated from different angles.

It becomes apparent immediately, in the first song "Es sungen drei Engel," a traditional used in Baroque keyboard pieces, in Mahler's collection of songs "Des Knaben Wunderhorn," and by German jazz trombonist Albert Mangelsdorff. Contrary to the usually perky and cheerful phrasing of the song, Wesseltoft's rendition is a radically de-densified and reduced piece of great lucidity. It unfolds in playful harmonic shifts, from the periphery to the core of the melodic line, between embedding and emerging.

Angels are sizable and elusive at the same time, as fictitious embodiments of the sounds of the universe. It's like the diffusion of the air in and through space, the course of time, the flow of energy and breathing—all elements relating to each other in and through this music.

There are three sacred songs, the already mentioned three angels song, a choral by Bach and a psalm by Danish composer Christoph Ernst Friedrich Weyse from the Danish Golden Age (born in Hamburg). In Wesseltoft's hands it seems that these pieces and pieces like "Angie" (Jagger/Richards), "Bridge Over troubled Water" (Paul Simon) and others share a common mood or even tonal center. It doesn't mean however that simplicity rules here. Bob Dylan's played-to-death "Blowing In The Wind" is reshaped by Wesseltoft in an utterly beautiful way. Also the music of Bruno Mars' dance hit "Locked Out Of Heaven" gets a floating spiritual load. The way Bugge Wesseltoft is interpreting or reshaping (European) standards here, substantially differs from what is common practice in (American) jazz. Wesseltoft drives on a different energy here, providing an unprecedented way of playing standards. Like in other kinds of music Wesseltoft is/was engaging in, you can feel very well that it's all for the sake of sharing the joy of music on a light and deep level with the audience.