Angles: Every Woman is a Tree

BY DEAN CHRISTESEN
July 2, 2008
Sign in to view read count 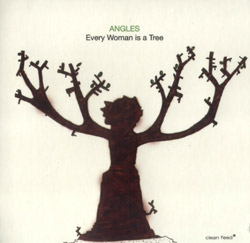 Every Woman is a Tree is dedicated to the women of Iraq, whose children cling to their branches for protection during this time of war. It asks the brutal question of what happens to the children when the branches are cut and the tree is killed, as well as questions of leadership and societal upbringing. The six musicians of Angles make this a personal matter through their music, as each track is unified by the sense that the men are all deeply affected by current worldly affairs. From the opening piece, an overwhelming frustration and even disgust with the world's current state is apparent. The music depicts a 21st-century depression: a poverty of life and mercy augmented by a wealth of war, violence and terror.

The album is not to be compared to a tribute to an event in history or recent disaster; it is a potentially timeless piece of music that avoids geographic or dated cliches and is more effective because of that. The musical information parallels the poetry of saxophonist and leader Martin Kuchen's liner notes, but not as one would expect. For example, the title track is a beautiful concept in writing that sounds less like a memorial to mothers than a child's journey to seek protection of a branch in a land ridded of trees. "Don't ruin me" finds shocking harmonies in the horns laying atop mountains of a power-hungry rhythm section. Even the last track, "Let's talk about the weather (and not about the war)," toys with a tritonic Charleston rhythm over a melody in despair.

The three horn players would not be out of place on a post-bop gig, but they flex their muscles here for a different purpose, a new cause and a problem pertinent to now. Free-metered sections collide with smashing beats led by drummer Kjell Nordeson and haunting ostinatos by bassist Johan Berthling. Kuchen conducts his group—which often contains the energy and activity of a big band—through his horn and with audible vocal cues, not unlike Charles Mingus, which only adds to the music's mystique. Brisk runs up and down the horn are matched with birdcall flurries and the screeching might similar to that of Eric Dolphy.

All six pieces steer away from harmonically major moments and mostly avoid any sounds of joy or relief. And why should they not? It's an honest and accurate portrait of the world. Every Woman is a Tree tells the story of now.

Peace is not for us; Don't ruin me; My world of mines; Every woman is a tree; The indispensable warlords; Let's talk about the weather (and not about the war)

Dean Christesen is a drummer, writer, and creator of RVAjazz, an online resource for under-the-radar jazz, experimental, and improvised music in Richmond, VA.