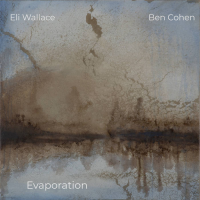 In a series of imaginative projects, pianist Eli Wallace and saxophonist Ben Cohen have shown themselves to have a remarkable range of creative impulses. Wallace has thrived in a powerful duo with percussionist Rob Pumpelly called Dialectical Imagination; the two create furious intensity with a substratum of romanticism, as on The Angel and the Brute Sing Songs of Rapture (Atma Nadi Records, 2017). Cohen has a lyrical side as well, displayed to strong effect in his Viriditas trio, which at times invokes the spirit of early Ornette Coleman. Wallace and Cohen have teamed up previously, in a trio with drummer Dave Miller: their Audience Participation (Eschatology Records, 2018), made under the moniker Cataclysmic Commentary, was about as tempestuous as the group's name would suggest, by turns startling, assaultive, and unpredictable. But Evaporation, their first duo collaboration, is a very different creature altogether. Its emphasis on restraint, silence and texture signals a new direction for the pair, with intriguing results.

Through three improvisations, the first, "Saturation," coming in at a substantial 33 minutes, Wallace and Cohen wind through their way through dialogues predicated on exceedingly patient exchanges and measured expression. The emotional catharsis found in much of Wallace's other work is largely absent here; even during the first few minutes of "Saturation," when his skilled use of prepared piano is at its most piquant and percussive, careening off of Cohen's assertive overblowing, the effect isn't overwhelming, and it seems merely an opening effort to strip away any preconceived expectations, as the majority of the piece is centered on much more muted explorations. The sonority of the instruments themselves becomes the focal point. Wallace sticks largely to prepared piano throughout, utilizing the piano's sound- potential rather than its tonality, while Cohen ranges from long, drawn out single notes to upper-register flurries. At other times the two are content to use silence and the bare minimum of expression, seemingly testing the limits of what can be communicated with the smallest possible gestures. It's an expansive, at times absorbing piece of music, although some listeners might find their patience tested by the piece's length and considerable subtlety of movement.

Wallace takes a contemplative turn on the brief, two-minute "Respite," with some pensive chords supporting Cohen's subdued, plaintive cries, before the album concludes with the ten-minute "Evaporation." Wallace once again returns to prepared piano, but his use of the bass register lends a forbidding aspect to the piece, and Cohen's languid, brooding notes build a mood of unsettled calm. The ephemerality of the music is in keeping with the title of the piece, and it is a fitting culmination to an album as fixated on absence as presence, and which gives voice to what is implied rather than what is stated emphatically.