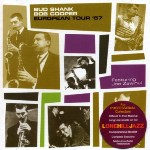 Bud Shank and Bob Cooper were prolific players on the 1950s West Coast jazz scene, readily available to participate in studio sessions while making a lot of hay as studio musicians. However, they developed a unique chemistry early on as members of Stan Kenton's band, particularly in the area of unusual instrumentation. While the altoist and tenorist were kindred spirits, it was their affinity for the unusual flute and oboe combination that really ignited their relationship, resulting in a series of fine recordings. Few jazz musicians enjoyed the kind of symbiotic relationship that Cooper and Shank held for so long.

These recordings, from their first trip through Europe in 1957, are part of a series from Lone Hill, collected from various overseas sojourns. Cooper and Shank took a brief break from touring to rub shoulders with pianist Joe Zawinul's working studio trio in Baden, Germany. Zawinul would soon emigrate to the U.S. to become famous as part of altoist Cannonball Adderley's unit, but here, he, bassist Johnny Fischer, and drummer Victor Plasil provide the top-notch backing that comes from working together for so long. Also joining the reeds in the front line is the masterful trombonist Albert Mangelsdorf.

The group runs through a few originals, kicking things off to a fine start with "Vielaf, a spirited tune that brings out fine soloing from all. "A Night In Tunisia is as fiery as any other recordings of the blower since Gillespie and Parker, but the real highlight is a ballad medley which allows the front line and Zawinul to take masterful, elegant solos. All of these songs are fairly lengthy, allowing each of the soloists to stretch out. While Cooper and Shank had recorded numerous times, they hadn't played with the others before and in some ways it's astonishing that they were able to achieve such symbiosis.

The ample bonus tracks come from a radio broadcast in Dusseldorf, featuring Shank with the Hans Koller Combo (Cooper is not present). While the sound quality isn't the best, these recordings also showcase a group of Europeans weaned on American jazz, who were capable of matching their idols in passion and dexterity. Of particular interest is the presence of Gary Peacock on bass and Atilla Zoller on guitar, both of whom eventually made names for themselves in the States. There's nothing really surprising here, just a lot of terrific playing of some great standards, that brought out the best in everyone.

Bud Shank and Bob Cooper at All About Jazz.