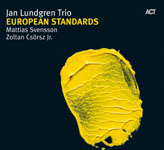 While purists continue to debate and defend a by now non-existent demarcator between American jazz and that from everywhere else around the globe, most musicians have dispensed with such meaningless delineators and embraced music from all cultures within jazz's broad continuum. That needn't suggest that there's no place for the tradition where the music began, and Swedish pianist Jan Lundgren makes it crystal clear on European Standards that, in addition to a classical background that has infused albums like the subtle and sublime Magnum Mysterium (ACT, 2007), he's equally familiar with and influenced by North American icons including pianists Herbie Hancock, Erroll Garner, Bud Powell, Oscar Peterson and Bill Evans.

European Standards follows up his 1997 Sittel album, Swedish Standards, an award-winning Swedish classic now being reissued by ACT concurrent with this CD. While Swedish Standards did for the music of Landgren's home country what Norwegian pianist Dag Arnesen has done more recently with Norwegian Song (Resonant, 2007) and Norwegian Song 2 (Resonant, 2008). European Standards takes a broader view, culling music from 10 countries including Germany, Hungary, Switzerland, Poland and Austria, with but a single entry from Sweden—a dark-hued solo reading of the late Esbjörn Svensson's "Pavane - Thoughts of a Septuagenarian," from the pianist's group e.s.t.'s Good Morning Susie Soho (ACT, 2000).

Some of the material is more familiar than others—a partly reharmonized, gently balladic view of Michel Legrand's "Les Moulins De Mon Cœur" (aka "The Windmills of Your Mind'); a brightly swinging and tightly arranged look at The Beatles' love song, "Here, There And Everywhere"; a tender reading of Italian composer Luis Bacalov's title song to the 1994 film Il Postino; a backbeat-driven, slightly funkified version of Kurt Weill's "September Song"; and an elegantly melancholic interpretation of Polish composer Krysztof Komeda's theme to director Roman Polanski's Rosemary's Baby (1968). But even the less familiar music is treated with a delicate blend of respect and heedful irreverence. The German "Computer Liebe" opens the album on a funky note, Mattias Svensson's acoustic bass processed with a filter to lend it a hint of the modern. The traditional Hungarian tune, "A Csitari Hegyek Alatt," begins with Lundgren alone, but even when Svensson and drummer Zoltan Csörsz, Jr. enter and provide it with a soft pulse, the pianist's romantic impressionism remains definitive.

Csörsz remains largely a support player throughout, though he's a tasteful colorist whose percussion is as important in defining the Pat Metheny-esque "Reginella" as is his nuanced groove. Svensson's an equally vital anchor, but delivers some fine solos throughout, especially on the unmistakably blend of Spanish vibe with mainstream harmonies on "Yo Vivo Enamorao."

But as important as the group interplay is throughout European Standards, it's Landgren—whether or grand piano or Fender Rhodes—who shines from start to finish. Swedish Standards may have been a classic in its home country, but with wider distribution and, in the intervening years, a growing reputation, Lundgren's European Standards deserves to be a popular choice for fans around the globe.