From Bari to Trondheim

Last year the Federation met in Bari in the Puglia region of South Italy for its twenty-fifth annual assembly. This year's assembly took place about 3300 kilometers north of Bari, in Trondheim, Mid Norway, organized by Midnorsk Jazzsenter. Jazz activities in Norway are spread among three regional zones (south, mid, north) which is not surprising given the extent of the country. Horizontally getting smaller half way up north, the mainland of Norway stretches from 13°N to 58°N at the western periphery of Europe. Driving from Kristiansand in the south to North Cape covers about 2,500 km, plus Norway has 50,000 islands off the coast, including the Arctic archipelago of Svalbard at 71°N.

Trondheim as the third largest city of Norway is a center of intelligence in science, engineering and technology but above all it is historical ground concerning Norwegian history and identity in general and jazz/music specifically. Trondheim started the first Norwegian jazz-education at the end of the seventies of the last century which is now part of the Music Department of Norwegian University Science and Technology (NTNU). Trondheim with its 30.000 students is characterized by a unique combination of scientific- technical and musical excellence. The city also houses Norway's national museum for music and musical instruments with a collection from around the world and in the impressive new Rockheim building the national center for pop and rock music.

This is related to and might be described as creativeness fuelled by independent and confluent mindsets of young people coming from places all over Norway, all with their own strong identity. Young people encouraged to act in that spirit are used to develop and maintain that. Norwegian identity, it seems, is not so much driven by forced uniting conformism but by a tacitly shared consensus of their rooted peculiarity as a core value and a necessary means of survival.

Kristin Danielsen, chairman of Norwegian Jazz Federation, pointed in that direction in her opening-address and Erling Aksdal, professor at NTNU Department of Music in Trondberg and one of the founding fathers and advocates of the 'Trondheim-Model' gave some insight into the open oral approach connected to that mentality with its vivid spirit. That spirit affected the three days of conferencing dedicated to (a) education of jazz musicians, (b) knowledge of /insight in audiences, (c) jazz events with special experience- qualities, (d) general assembly and board meetings, (e) tasks and collaboration of jazz media in Europe, (f) next steps resulting from (a)—(e). 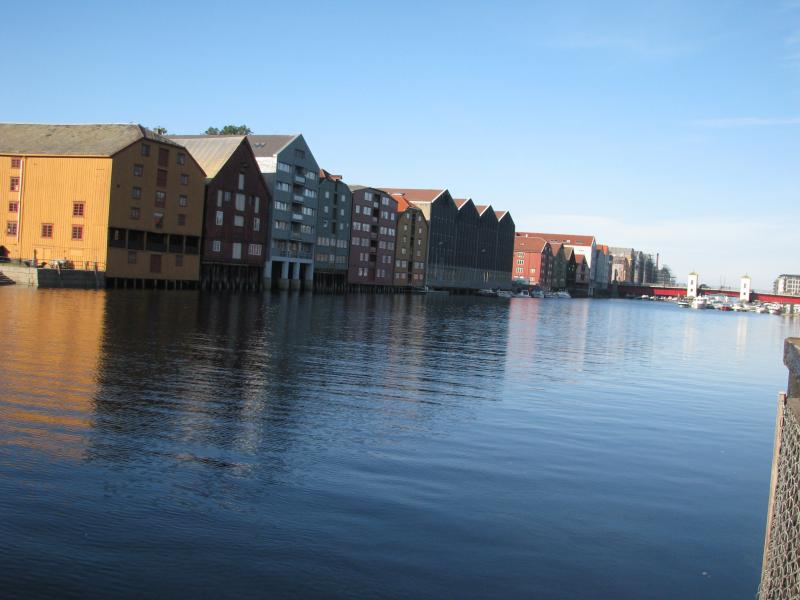 Upon arrival to Trondheim the city showed in bright, warm sunshine and blue sky, the perfect condition to stroll Bakklandet, Trondheim's old quarter along the curving Nidelva river with its restored old wooden buildings, originally workers houses. The quarter, just ten minutes walk from Rica Nidelven hotel on the other side of the river, was saved from city planners' modernization phantasies. The lively neighbourhood is now considered the heart of Trondheim's heritage and cultural identity.

Trondheim offered superb accommodation at Rica Nidelven hotel situated on the edge of the former shipbuilding area and renowned for its high quality food and kitchen. The concert-venue at the old dock house on just five minutes walking distance had excellent sound quality and a pleasant, inspiring atmosphere. The Dokkhuset venue was populated by young audiences and even though it was packed at most of the concerts it remained comfortable because of people's care and flexibility.

The Trondheim meeting had a pleasant rhythm of activities, provided a climate and environment of free flow of ideas, good examples, illustrative material, interested and patient listening as well as fruitful discussion and yielded some good and useful results. This especially applies to the media-group Europe Jazz Media (EJM) which achieved remarkable progress concerning collaboration and concrete perspectives of future development—the miraculous Trondheim turning point. The practice of various festivals and venues were presented (Tampere Jazz Happening, Northseajazz Rotterdam, Bimhuis Amsterdam) as well as festival-contexts with special experience- qualities (Jazz Biketour Groningen (NL), N.A.T.U.R Bochum (G) and Earwax Gent (B)) which both provided a useful basis for further discussion and development of ideas and projects. 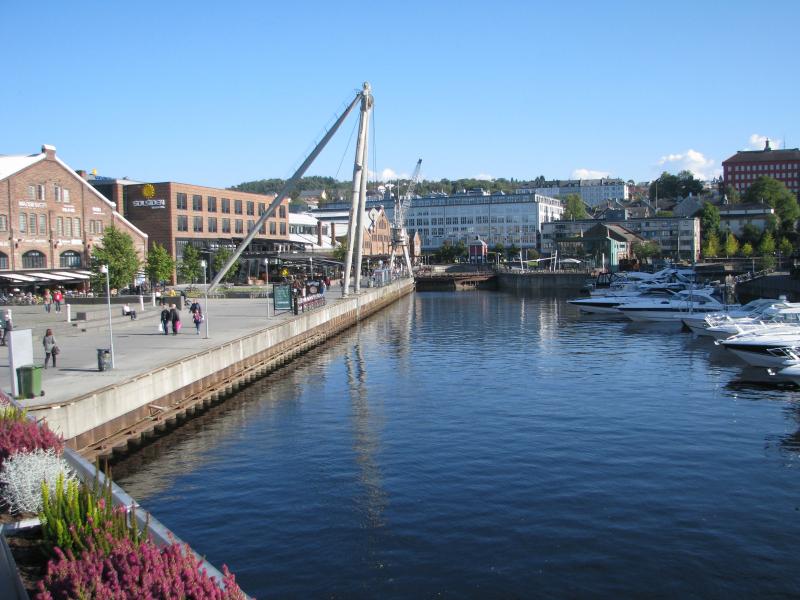 The three concert-nights with fourteen concerts took place at the Dokkhuset venue, an old dock house in the now transformed former shipbuilding area of Ørens Mekaniske Verksted and Trondheims Mekaniske Verksted, once the largest employer in Trondheim. When the industrial site became disused in the late 1990s, it was turned into a new high-end area with some of the original buildings and artifacts like the canal and one of the old cranes kept there as integral part of it.

The first night at Dokkhuset, packed with a young local audience, presented an all Scandinavian program entitled "Young Nordic Jazz Comets" (YNJC). It offered surprising music by young musicians from Zweden, Faroe Islands, Finland, Iceland, Norway and Denmark (only Greenland missing!). The YNJC event started in 2000. Through the years it changed from an annual competition to a program with full (showcasing) concerts. It operates in a similar spirit as Dublin's new Pan-European 12 Points festival.

Casey Moir played a sophisticated set with extreme leaps and wild rides, skillfully performed. Their music showed lots of good ideas but was a bit overloaded in the workout. Singer Moir at times was acting weird instead of giving way to the feeling of real madness. Bassist Poulsen's group (with Kjetil André Mulchid as impressive alto- saxophonist) played with a lot of verve, urgency and heat. It finished with an infectious kind of Faroe lambada. Poulsen, still studying in Trondheim, hopefully will be the first director of a jazzfestival on the far remote islands. Kadi Vija, a selfconscious singer with a firm throat, led her band through an energetic and powerful set. She dared to pause, drop silences and increased tension and dynamics. The Icelandic piano-trio Skarkali (Ingi Bjarni, p, Valdimar Olgeirsson, b, Óskar Kjatansson, dr) had to face maybe the biggest challenge by adopting this classical format. Apparently the threesome chose to work its way through in a classical way. It reached a respectable level with moments of beautiful melodicism and has still a way to go. 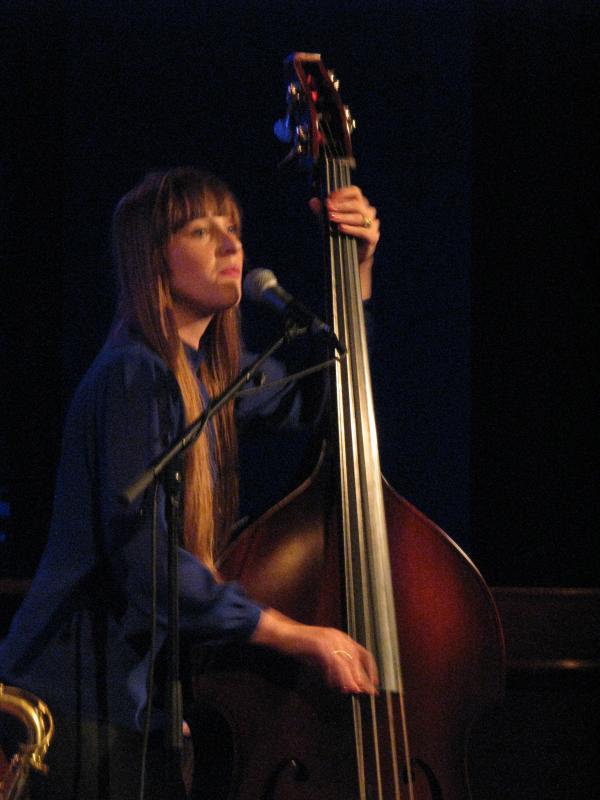 Pixel was the most agile and dynamically balanced group. With impressive and appealing drive the four young members took the audience on a ride along different musical realms. Just slightly touching on some characteristic stylistic features those were imbibed and effortlessly integrated in their very own flow. With two horns, vocals and a connected rhythm section the band celebrated full sound. Rounding up Danish drums-organ-duo Crunch House was quite a bare bones contrast. Also the combination of these two young musicians, Jonas Ladegaard on drums and Emil Savery, is an illustrious contrast of temperaments: Ladegaard decidedly aggressive, at the edge of overdoing and Savery, shady and laid back. They turned the popular Hammond B3 genre upside down, redefined it completely. No prisoners were taken. With their different kinds of inexhaustible energy they went off, sharp with full blow.

Norwegian jazz was presented the second and third night. Each night had four groups with every night an internationally highly acclaimed local ensemble as main anchor: Trondheim Jazz Orchestra and Trondheim Voices.

Hard rocking electric guitarist Hedvig Mollestad Thomassen together with her fellow musicians bassist Ellen Brekkenand and drummer Ivar Loe Bjørnstad set the ball rolling. Brekken had a mighty springy bass sound, Bjørnstad not only hit hard but kept space open. Blue Cheer or The Melvins might be the first association. They call themselves 'trio' which is a bit strange for a combination playing classical loud and screaming guitar- rock. But it was not simply old time guitar-rock that they played. Within a compact approach the group played with the sounds and images of old time hard rock, made the music sound airier, clearer and more driving. They put in more space and worked through a series of clever recombinations with well known riffs surfacing at surprising moments. This time the threesome operated sharply on the edge with brilliant interplay. Mollestad released two guitar-albums with this trio on Rune Grammofon, Shoot! and All Of Them, Witches.

Next was Cortex, a high potential group not so well known yet that should rapidly change after their Trondheim performance. Aylerian rawness, screams, forward motion and full brassy sound of highly attractive melodic lines go together in their very own marvelous group sound. Their finishing piece "Mitotic Cycles" fully confirmed their reputation. It was the best derivation of Juan Tizol's Caravan I have heard in some time. Cortex is Thomas Johansson on trumpet, Kristoffer Berre Alberts, sax, Ola Høyer, bass, and Gard Nilssen on drums. Johannsson is just one more brilliant Norwegian trumpet-player in a seemingly endless row. Gaard Nilssen has become one of the most busy Norwegian drummers and key figure for the younger generation. Shortly Cortex will tour North America (29/11—12/12) together with another, guitar-driven group Gaard Nilssen takes part in, namely Bushman's Revenge. After touring Norway, Sweden, Germany, Belgium, France, Italy and Japan, last year Cortex released its second album, Göteborg on Gigafon Records. 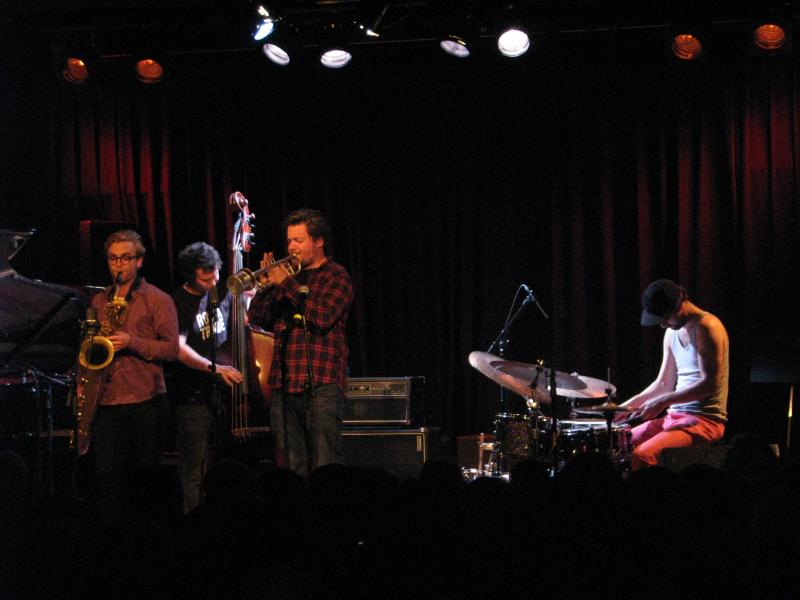 Cortex was followed by the trio of pianist Vigleik Storaas with bassist Bjørn Kjellemyr and drummer Per Oddvar Johansen, all renowned and highly respected first class musicians of the older generation. The trio with strong Trondheim connections—Storaas is a Trondheim Music Department professor and Johansen an alumnus—played a rich and subtle set with lots of folk-themes. It was remarkable how eager and intensively engaged the mainly young audience listened to the quiet and restrained rendition of the trio. The trio's wonderful performance is another testimony of the rich musical quality to discover behind the Norwegian forefront.