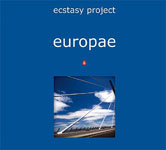 Ecstasy Project was formed in 1998 by Rafal Gorzycki, its drummer. Gorzycki absorbs a range of influences which he transforms into illuming nuggets with his compositions. His interest is currently churned by contemperary European and chamber music. He brings the two together, washes them in jazz and comes up with music that will linger for a long time in mind and heart.

The line-up of the band has changed over the course of their three albums. The quintet featured here fits the mood perfectly; they play classical music with feeling and then jump into jazz, to open up whole new vistas.

"Maestoso non troppo" sifts European classical music, with Lukas Gorewicz (violin) and Pawel Urowski (double bass) casing the melody in an incendiary groove. Pawel Nowicki (vibes) cools the tempest but the atmosphere storms its way back when the strings return. Gorzycki changes the complexion with his drumming. He brings in constant change alternating a spaced out tap with the heavy pummel of the bass and snare drums. The tune smolders and cools by turns, filling it with a heady juxtaposition of sounds.

"Allegro vivace animato" opens up a new pulse. As the title implies, the song is animated. This is established at the head with a brisk beat that propels the tune as it surges down its chosen road. Tomasz Pawlicki (flute) floats down his happy way, letting the melody sway breezily, while Gorzycki adds the color, with light daubs from Nowicki. The quintet locks in on the melody and then lets it explode in a resounding climax.

Gorzycki is a remarkable drummer in the way he works time and space, accent and beat and gets the rhythm to pulse and fill progression. He can change the direction and impetus to give each tune a nuanced grain. His drumming on "Adlibitum—Allegreto rallentando" is a perfect example of his range and style. He opens with lithe tapping on the cymbals and then lights little sparks as he flits across and adds translucent colors to the arco playing of Urowski. Having cast a different light on chamber music, he holds back and lets the music bathe in its own bright gentility.

The band is Polish; the song titles Latin, but the music, quite simply, is universal.