By Eyal Hareuveni
September 19, 2015
Sign in to view read count 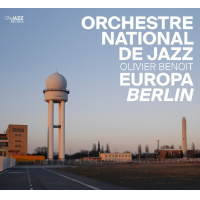 When guitarist-composer Olivier Benoit was appointed in 2014 as the new artistic director of the prestigious French Orchestre National de Jazz (ONJ) some local neo-cons expressed their worries that this orchestra may lose its jazzy touch. Benoit composed before music for orchestras like the Lille-based Circum Grand Orchestra and the La Pieuvre ensemble, but is known as an experimental guitarist and adventurous improviser whose musical language is genre-binding. Europa Berlin, the second musical portrayal of a major European cities after 2014 Europa Paris, may validate the neo-cons dire perspective. Though it owes little to swinging, blues-based jazz, it does offer an arresting, inspiring work of art. Still it owes much to the essence of jazz in its focus in jazz as ever-evolving, inclusive musical language.

Benoit, in his liner notes, says that he wanted to reflect the vibrations of Berlin, a city that symbolizes many of the dramas and the hopes of the 20th century, which still affects the city to this very day, its cosmopolitan, heterogenous and democratic values, urban planning and architecture. "The manner in which its citizens, the collective unawareness, the urban planners and the architects, are leaving their imprint on the city through the gaze they bring to their history, to the symbols punctuating it which people try either to hide or, on the contrary, to glorify, are absolutely captivating." The cover photo of the album is of the Templehof airport, once a symbol of the Nazi vision of Berlin as a world capital, and today an open park, solidify Benoit perspective. The album recording marked two events: the 25th anniversary of the fall of the Berlin Wall, and the dramatic events which began on January 7th, 2015 with the terrorist attack against the Charlie Hebdo Magazine, coinciding with the last day of the recording.

This new, eleventh edition of the orchestra features an inter-generational cast of musicians, all open to multiple stylistic registers, many leaders of their own outfits including saxophonist Alexandra Grimal, pianist Sophie Agnel, violinist Théo Ceccaldi, bassist BrunoChevillon and drummer Eric Echampard. Benoit compositions for the Orchestre are tightly arranged, and as expected, blend elements from prog-rock, abstract electronics, contemporary chamber music and fiery, free jazz, with enough space for personal, improvised interpretations of all musicians.

The composition titles relate to the book Berlin, L'effacement des traces (Berlin, erasing traces) by Sonia Combe, Thierry Dufrêne, Régine Robin. All 14 compositions have strong, memorable themes. Benoit orchestrates the ONJ in different configurations, each time highlighting changing dynamics. But of all the compositions—even in its most elegiac compositions as "Révolution"—it maintains the same energetic, passionate interplay that mirrors so beautifully the turbulent, shifting dramas of Berlin history, adding accumulative, nuanced sonic layers that reflect the vibrant atmosphere of the city. It is clear that Benoit is fascinated with Berlin's constant renewal, buzzing energy, and its ability to rewrite its vision, to draw constructive lessons from its troubled past. And, indeed, Benoit, the guitarist, is one of the most prominent soloists on the composition "Réécriture" that relates to this aspect of Berlin.