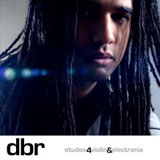 The vibrant Scandinavian music scene often suggests that anything is possible. Divergent styles and technologies regularly come together as new, cohesive and organic wholes. While this kind of experimentation is taking place on the west side of the Atlantic, demographics and a larger industrial machine drive such experimental music further underground. It's almost a certainty that violinist Daniel Bernard Roumain's debut, Etudes4violin&electronix, would do very well in Scandinavia. More's the pity, then, that it deserves to do equally well here but likely won't.

Roumain seamlessly blends a wealth of classical influences, rock and hip hop beats and ambient textures, creating an intriguing amalgam that's the most strikingly beautiful music ever released by Thirsty Ear. It's as much the result of the guests he collaborates with as it is his own undeniable voice, and his comfort level in using the studio as a tool to assemble these nine compositions, creating an expansive aural landscape that has many references but inevitably takes on a shape all its own. With long-time David Sylvian collaborator/pianist Ryuichi Sakamoto, the intrepid DJ Spooky, minimalist forefather Philip Glass and other guests, Roumain explores terrain that ranges from bold beauty to the haunting melancholy found when sound approaches silence.

Some pieces are sonically untarnished; his duet with Glass on piano, "Metamorphosis," is an unadorned duet clearly written with Glass in mind. A simple pulse alternates and, at times, blends with repetitive arpeggios layered over simple harmonic changes that recall the best of Glass' mid-1970s work, with Roumain moving from articulated arpeggios to a plaintive melody and his own form of forward motion.

In contrast to the unembellished minimalist roots of "Metamorphosis," Roumain's two duets with Sakamoto are more ethereal, although the violinist does rely on repeated patterns at points during "The Need to Be." Still, with Roumain leaving Sakamoto on his own at times, and a certain amount of spontaneous interaction taking place, this piece and the near-ambience of "The Need to Follow" are, with Sakamoto's piano more heavily reverbed, akin to something one might hear from ambient composer/pianist Harold Budd.

While much of Etudes4violin&electronix could not have been conceived anywhere but in a studio, the final result is something that could easily be performed live. It's a stunning debut from an artist who, if there's any justice, we'll be hearing more from in the future.

Black Man Singing; The Need To Be; Resonance; The Need To Follow; Divergence; Metamorphosis; The La La Song; Fayetteville; Lava.