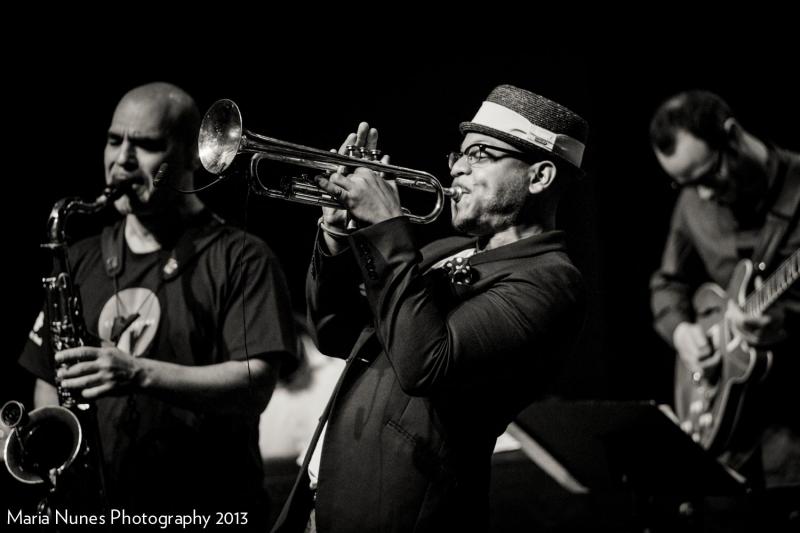 Fresh from an exciting TEDx Port of Spain talk in the morning, the always dapper Etienne Charles and his band delivered a superb set of jazz at the gala opening of his Creole Soul tour stop in Trinidad on the evening of November 30 at the Little Carib Theatre in Port of Spain. A homecoming of sorts—this is the second return on this tour having performed at Jazz on the Beach in April this year in Tobago—this stop solidifies the star status of this highly personable trumpeter and musician.

Delivering two sold-out shows on that weekend, it became obvious that this venue is too small for the natural local audience of this globe-trotting musician. After forty-plus international performances in support of his latest CD Creole Soul, Charles again raises the bar for local musicians to go over, and continues to serve as an apt inspiration of desired goals.

As is his wont, Charles brought along with him his mainly American band—"some of the best musicians on earth, bandleaders and composers in their own right"—to provide rich sonic support and showcase the music and "New World African" rhythms with a jazz sensibility in short supply here. Polyrhythmic drummer, John Davis and pianist Victor Gould gave master classes. His set was a balance of originals and covers culled mainly from the Creole Soul CD highlighting a variety of moods and colours: the nuanced elegance on his take of the Joseph Kosma composed standard "Autumn Leaves" and the Winsford "Joker" DeVine-penned "Memories," the high energy and percussive jam of "Roots" and "Santimanité," the groovy comfortableness on the Bob Marley medley, "Turn your Lights Down Low"/"Waiting in Vain" and Charles' own "The Folks."

The congruence of genius and art was on display in the sacred space Caribbean dance pioneer Beryl McBurnie created all those decades ago. Charles reiterated the importance of playing in the venue, its historical precedent for art in the Caribbean being a catalyst for his determined move to make the theatre an intimate venue like a jazz club where the connection with the audience is paramount: "It's about the band and the audience, that's the exchange." The desired intimacy, that closeness was a plus to capture the solid musicianship and supple technique of the players.

Bassist, Burniss Travis II displayed virtuosity on his solo introduction to the Dawn Penn popularized "You Don't Love Me (No, No, No)" giving an object lesson in pizzicato style without losing the swing feel. Alex Wintz' electric guitar propelled the song "Creole" to crescendo and ovation. A musical conversation between Charles and his long-time sideman, Guadeloupean Jacques Schwarz-Bart, trumpet and tenor saxophone, on Thelonious Monk's "Green Chimneys" highlighted improvisation at its best, easily including melodic snippets of "Jingle Bells" and "Sleigh Ride" to convert an unusually stoic audience into a screaming herd.

Even the spirit of Beryl McBurnie reverberated in the room. The trumpeter's sister Abby Charles, a celebrated dancer who returned from overseas for the show, manifested in "Caribbean" movement the energy of the music at the close of both halves of the show. St. James, Trinidad-bred, US-based percussionist D'Achee provided impetus for spirits moving feet. That interplay of dance and music was a reminder of the holistic nature of a Charles' concert. Feet were tapping, heads were bopping, the audience delight was palpable.

On an island where unlettered men are honourable, "excellence" becomes a hackneyed adjective. The spectacle of performance and the expectation of excellence although subjective, are measurable. Fine musicianship, honed from years of practice and more importantly from gelling with top musicians on the road is a standard that audiences expect at jazz concerts. That standard was met easily. Etienne Charles has said about performing that, "It's about documentation purposes. It's the only way you can know if you are growing." Whether on a rain-swept beach in Tobago in April or in a sacred performance space in the Trinidad capital in December, we are witness to consummate musicianship, easy charm and the notion that the next time he returns to this island, it will be even better.