By GARETH THOMPSON
February 7, 2020
Sign in to view read count 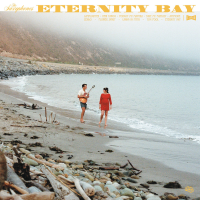 Alexi Erenkov started out as a jazz student, but turned to guitar-based songwriting in a bid for deeper self-expression. Put simply, he found this new approach more liberating than working on Big Band arrangements. Interesting, then, to recall that guitars were merely tolerated and rather buried in the rhythm section during Big Band's heyday, until the likes of Charlie Christian helped change all that.

Erenkov's new project, The Saxophones, emerged in 2018 with its debut album Songs Of The Saxophones (Full Time Hobby Records), an almost wraithlike take on 1950s pop and west coast jazz. Intimate and deviously trippy, it announced Erenkov as a serious craftsman with a fondness for musical nostalgia. He also declared the most important factor when choosing bandmates was love, which might explain why his wife Alison Alderdice plays drums for this Oakland-based duo. Love in its various forms also seems at the core of Eternity Bay, the group's second outing, written after the couple had their first child and anticipated another.

This time there is a more sunkissed uplift to the songs, as lounge and jazz meet 1970s Italian pop amid a surf-like ambience. Throw in some mambo, popcorn and bebop guitar, maybe a little Memphis torch and twang too. What else? Shades of Astrud Gilberto, Donald Fagen, Michael Naura, Paul Desmond with Jim Hall, Cal Tjader and Gothenburg's exotica quintet Ìxtahuele. If that all sounds like a breezy mix, then be cautioned that Erenkov employs lyrical mind games throughout. The album's becalmed surface conceals some rocky emotions. "Life is short, but it takes so long to explain my point of view" he sighs on the opening cut, "Lamplighter," over a slow foxy sax and lean guitar lilts.

Erenkov's seductive vocals often drift in and out like he is coming round from a daze. "New Taboo" finds him crooning, with a knowing smile, "I'm looking to uncover a new taboo/Do you know anything I shouldn't do?" Holistic flute breaths in the song's chorus also billow across "Forgot My Mantra," inside a soft-focus guitar haze. "Take My Fantasy" is a downbeat bossa piece using echo-laden harmonies, while "Anymore" takes a Polynesian shuffle through lush spirals of guitar and woodwind. The brief meditation "Zendo" tumbles into a spiritual vortex, "Flower Spirit" attains an almost supernatural radiance, before "Living In Myth" basks in sparkling guitar reverb and the clean precision of Erenkov's sax. The peppy "You Fool" wears pretty psych colours, with the title track echoing the previous album's loungey blues. In a rippling wash of reflections, the song seeks empathy for our endless regrets: "Think of the difference you could make/Instead of all your small mistakes/I know you wanted to be so much more/Now you see what all that time was for."

Within these grooves of joy there lies much deep contemplation on human relations. Eternity Bay might not be the soundtrack for paradise it first seems, but this album is clearly a stylistic triumph.