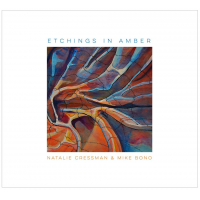 The admonition, "Youth is wasted on the young" is neither accurate nor applicable to Natalie Cressman. Cressman, a vocalist/trombonist/composer/arranger is a modern day Renaissance woman who wears many hats and all of them beautifully. She is a standing member of the Trey Anastasio Band, as well as Jesus on the Mainline. Cressman has recorded two previous CDs: Unfolding (Self Produced, 2012) and Turn the Sea (Self Produced, 2014), both I found as exceptional as they were different from one another.

Cressman joins the equally youthful and talented guitarist Mike Bono, the two uniquely cooperating on the nine pieces included on the present Etchings in Amber. Light years different from Cressman's previous recording, Etchings confines the singer to a singer-only role (no trombone) singing lyrics Cressman wrote for several of Bono's compositions, while contributing the music on three of her own lyrics. Touted as "genre-bending" Etchings is actually an atmospheric suite of impressionistic musings. The opening "Dusk" is sensually crepuscular, a mood further enhanced by the complex harmonic pinning composed by Bono. Several of the songs ("Winds of Whims," "Folds of Time") bear the unmistakable fragrance of Joni Mitchell's expansive vision. The album closes with the pastoral "Goodbye Lullaby." Cressman (and Bono) continue to surprise and delight.

Dusk; Wind of Whims; folds of Time; I Look to You; Picture; Trapped in Forever; Mountains of Malaga; Losing Grace; Goodbye Lullaby.