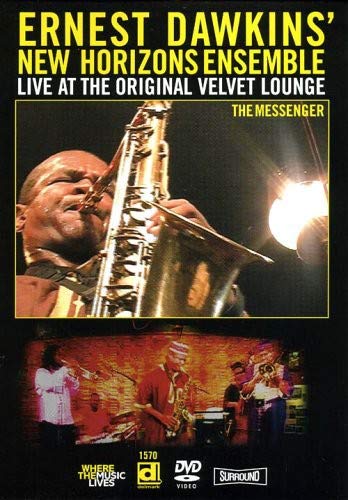 Ernest "Khabeer Dawkins is old-school to the bone. Which is not to say that he's a conventionalist, much less a purist. In line with the philosophy of the Association for the Advancement of Creative Musicians (AACM)—of which he is a member, alumnus and present chairman—Dawkins is simultaneously traditionalist and futurist. His New Horizons Ensemble is a sort of cultural mission; now in its third decade, it continues to excite and educate, blending reverence with a taste for pure, euphoric spectacle.

The Messenger finds the group in suitable environs. Fred Anderson's Velvet Lounge is a performance venue that is renowned for both its progressive agenda and its respect for communal tradition. While this music certainly registers as vivid, fun and consummately played, it's also of a piece with something larger: the black musical ethos. Performing a repertoire of potent, very idiomatic compositions—recalling everything from the 1961 Jazz Messengers to the dirge-like themes of the Ornette Coleman trio—the Ensemble doesn't so much re-imagine jazz history as re-energize it, treating it with veneration and love.

This isn't to say that the Ensemble is devoid of individuality. It is, indeed, the idiosyncrasies and energy of the musicians that keep the history afloat. Dawkins is a powerful instrumentalist who at times recalls the plangent, human cry of Ornette Coleman and the fire of Sonny Criss, but his phrasing and attack have a unique angularity. Brown and Berry are both excellent technicians, well versed in extended techniques, as well as responsive group voices. Savage and Spencer are extremely impressive as the young rhythm section, suggesting a rougher version of the William Parker-Hamid Drake dyad, with a taste for open, backbeat-heavy grooves.

Delmark's DVD edition does a fine job of capturing the performance. This is functional cinema, shot with mid-quality cameras, inclined toward a documentary style. The camerawork is subtle and unobtrusive, surrendering itself to the natural air of the concert space. The final film is enough of a joy to offset the weak DVD programming, which is devoid of any extras—it's a petty concern, ultimately, with so fine a performance as this.

Although informed by the seeds of past pioneers, this is not an academic, institutionalized music. In typical AACM fashion, it's played by the people for a history that is even now being written. This makes for an exhilarating creative experience: singing to the future, planted firmly in the footprints of our fathers.