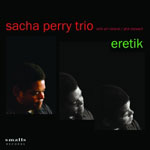 Sacha Perry first emerged out of relative obscurity last year as a member of the Across 7 Street quintet on Made in New York, the second disc in Smalls' ever-expanding catalogue and the one that more or less established the label's prevailing sound: fresh but familiar, accessible but challenging, heady but emotive. Or to borrow others' paradoxical comments on Perry himself: "neither retro nor revival," "extraterrestrial and down to earth," "old but new," "[music] you've never heard before but thought you had."

The pianist's first disc as leader, Eretik ("is heretic, is erratic, is erotic"), gives Perry a more prominent voice than his collaborative work with Across 7 Street, spotlighting his individual style of composition and performance. His solos are colorful and rolling, always with an air of spontaneity and urgency . His tunes are memorable and Monk-like—proud, in a way, of their quirkiness, without being too cute or alienating. "All Right" and "Let's Get with It" are straight-ahead melodies that hover on the edge of dissonance, and the opener "Erratic" is something like a mutated "Jeepers Creepers." For touchstones other than Monk, think Bud Powell and Frank Hewitt, especially evident on the cheeky/classy "Goodnight, Goodnight" intro. Perry's left hand generally tends to be laconic and mathematical, his right uninhibited and poetic.

Perry is accompanied here by bassist Ari Roland, another Across 7 Street alumnus, and drummer Phil Stewart. The members of the trio are clearly comfortable together—enviably so—yet they remain taut and responsive, despite the casualness of the set. Stewart prefers his brushes, and his mixes of sliding, slapping, caressing, and chugging mimic and sustain Perry's jerky bop melodic lines. During solos Roland makes frequent use of his bow. This works well on tracks such as "Another Day"—digging and sawing, more abrupt changes in motion to parallel the piano. But on "Let's Get with It" it backfires. The bouncy finger-snapping momentum of the track gets a bit lost with Roland's bowed solo, which sounds uncertain and aimless. Perry almost seems relieved when he closes it out by sprinting from one of Stewart's rapid-fire drum solos to the next.

What might best illustrate the music of Eretik are the penultimate and final tracks, "Hope Springs" and "Desolation." The former, despite its title, is not entirely optimistic. Nor is the latter entirely grim. There's a lot of spirit and joy to be found in Perry's music, and when his trio swings, it really lets loose and swings. But there are equal amounts of severity and haunting, and it takes a subtle musical intelligence and rich sense of humor to put them successfully side by side. Perry capitalizes on these contradictions for a fire-and-ice effect, creating forward-looking bop with deep roots.

Visit Sacha Perry on the web.

Erratic; All Right; Let's Get with It; I Keep Coming Back to You; Whirligig; Goodnight, Goodnight; Another Day; Things Gone By; The Panic; Hope Springs; Desolation.