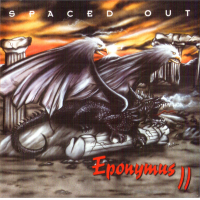 The second fire-starter from an excellent Quebecois quartet. Antoine Fafard’s Spaced Out made a large impression on the contemporary fusion scene with their self-titled debut disc last year, and Eponymus II pushes further into unknown territories. There are even more Mahavishnu-worthy chops here (the tight, fast unisons on the opening track are simply jaw-dropping), and the spacey, mystical prog auras are even more compelling this time around.

Fafard is once again the major feature, providing both front-line assaults and rhythmic support with awesome facility. His lightning thumps and funky bumps on “The Lost Train” clearly draw from Stanley Clarke circa School Days, and on “Infinite Ammo” his bass functions almost as a percussion instrument in tandem with Martin Maheux’ drums. Louis Côté is one of the best, most creative guitarists in the field. When he’s replaced by Mathieu Bouchard on three tracks the results are equally astounding. One minor flaw with the disc is that Maheux’ drum sound is rather hollow on tracks 6 and 7, but that doesn’t really detract from the enjoyment. Eric St.-Jean’s keyboards are usually relegated to providing important background atmospheres, but he steps further out on the many-mooded “Trophallaxie”.

At 53:24 the disc might seem to come up a bit short, but there’s so much energy and motion in the music here it’s hard to feel short-changed. Besides, the musicians might not have been able to take much more abuse! Spaced Out is officially the band to watch this year. Highly recommended, along with their eponymous debut.