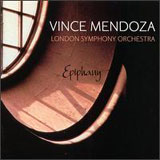 In and out of print since its initial release in '99, composer/arranger Vince Mendoza's Epiphany represents one of the finest examples of orchestration in a jazz setting. While there have been other fine examples of large-scale blending, they have often simply retrofitted existing material, as was the case with last year's Promises Kept , where pianist Steve Kuhn's compositions were lushly interpreted by arranger Carlos Franzetti.

Mendoza is a composer in his own right who may not be known to a broader audience, but has been a favourite source for artists including Gary Burton, John Abercrombie and Charlie Haden since he emerged on the scene in the mid-'80s. He's also a well-respected arranger, having worn that mantle for artists as diverse as Joe Zawinul, Joni Mitchell and Bjork. So it's a good thing that Michael Watts Productions has seen fit to reissue this significant disc so that it can be revisited by a fresh audience.

Unlike some jazz ensemble-with-orchestra collaborations where clumsy transitions between the two do nothing more than highlight their stylistic disparities, this effort reflects Mendoza's views that all the instruments available to him are part of a larger palette. Consequently the entire affair feels completely organic and unforced. There are times when the focus is on the orchestra, other times where the ensemble is in the forefront, and still other occasions where the two meet on common ground. The integration is so seamless that one is often unaware of the remarkable way in which Mendoza shifts the emphasis.

Mendoza has used sequencers as part of the writing process in the past, something that remains evident even on his more recent compositions, where repetition of complex passages act as a backdrop for themes that are occasionally convoluted yet always memorable. But with the broader textures available from the orchestra, he is able to construct subtle rubato passages. On the title track, where the strings gently introduce the piece, drummer Peter Erskine finally and delicately establishes time as the ensemble gradually inserts itself and pianist John Taylor takes a well-constructed solo that seems to intuitively ebb and flow with the support of the orchestra.

And yet as complex as Mendoza's charts can clearly be, even when the meter is irregular, they feature nothing jarring or angular. The overall ambience is lush without being saccharine, tender without being overly sentimental, easy on the ears without losing the challenge that bears new experiences on repeated listens. A broader dramatic arc imbues the entire cycle; one might listen to individual tracks, but taken as a whole Epiphany yields an altogether richer experience. With only six albums to his name, Epiphany is an all-too-rare opportunity to hear Mendoza in his own element, focusing on his own compositions with the broadest possible range of available textures and an all-star cast of improvisers. A classic.