By Karl Ackermann
February 28, 2017
Sign in to view read count 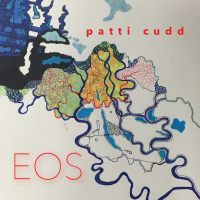 Percussionist Patti Cudd performs as a soloist and a chamber musician and is a member of the ensemble Zeitgeist. She teaches music at the University of Wisconsin and the College of St. Benedict & St. John's University. She holds a PhD. In Musical Arts and a Fulbright Scholarship at the Royal Danish Conservatory of Music. As a performer she has appeared on more than a dozen albums and premiered over one-hundred and fifty works as part of her ongoing vow to generate greater exposure to percussion-based creative music.

Eos is an expansive collection of sixteen commissioned works on three discs at a running time of almost four hours. Composers such as Paul Elwood, Christian Wolff, Morton Feldman and a number of other experimental, electronic and chamber artists have a writing presence in this project. While the album is a solo outing (with one exception), it is as much about electronics as percussion, often both elements working in conjunction. Cudd employs a variety of percussion instruments—some with ancient roots—others from the modern drum kit.

There is a vast assortment of works across these discs and they vary in texture, style and instrumentation. To understand the complexity of what Cudd is doing here, one need only absorb the technicalities of the opening composition "Duo for Cajón and Computer." On this track, Cudd plays the cajón, a Peruvian box-shaped instrument played by slapping with the hands, fingers, or brushes, mallets, or sticks. Cudd's computer takes input from the cajón's signal, measures volume and timbre and using filters, digital synthesis and algorithms and the treated sound is redeployed. Rather than resulting in an over-manipulated sound, there is a primal quality to the piece.

The compositions benefit from broad representation of the percussion family. "Rosas"—which features Sandra Brown on piano—is one of the few pieces with a melody, though a dissonant one. "Ancient Caves" features a bass drum played by hand, and electronics while "Snare Alchemy," is an improvisation for snare and computer. Cudd moves to the percussion sub-group for "Duo for Vibraphone and Computer" and "Liquid," both abstract syntheses of vibes and electronics. "Tattoo of a Gesture" utilizes a Turkish hand frame drum, bongo, elephant bells, singing bowls and cymbals enhanced through electronics. "Music for Hi-Hat and Computer" again uses digital synthesis processes to alter sound and time. The title track is a mingling of hand percussion, oscillators and sampled audio. The collection closes with "The Red Shoes" which includes Cudd reciting the poetry of the Pulitzer Prize winning Anne Sexton to a backdrop of percussion via what the artist describes as "found items."

Eos is largely in uncharted territory, especially as a solo endeavor. A number of the compositions were recorded nearly twenty years ago but had not been released by Cudd prior to this album. Many of the pieces clock in at double-digit times allowing each to develop slowly and morph in their progressions. Without considering the electronic aspect of these pieces (and few are purely acoustic), extended techniques flourish in the creative interpretations of Cudd. Certainly not a recording that will appeal to the mainstream,