By John Sharpe
January 3, 2016
Sign in to view read count 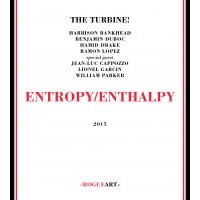 Among a stream of US/French collaborations documented on the Rogue Art label, The Turbine! represents an unlikely combination: two double basses and two drum kits. One pair hails from each side of the ocean with the Chicago team of Hamid Drake and Harrison Bankhead matched against Benjamin Duboc and Ramon Lopez (in fact a Paris-based Spaniard). The double CD package gathers excerpts selected from six live sets during a 2014 tour organized by a Transatlantic music network entitled The Bridge. Eight cuts on the first CD present just the core group, while the second features guests on each of four numbers.

Even though nothing is scripted, the Drake/Bankhead tandem ensures that links to the jazz tradition are never far away. It must be a challenge to play with Drake who often packs enough punch and swing for a whole section. However, apart from "Natural Energy" in which Drake and Lopez let themselves off the leash, the drums often play in bursts, which allows the basses and each other to be heard. Unfortunately, the positioning of the two basses in the middle of the stereo picture makes it hard to differentiate between them.

However Bankhead typically signals melodic intent, by means of an infectious riff in "Steaming" and with his flowing song-like arco line in the rhythmic stew of "Rotor/Stator," a piece also distinguished early on by the singing qualities of Lopez' tablas. Duboc on the other hand majors on texture and timbre, though both stray into each other's supposed bailiwick. Both basses figure prominently in "Thermodynamic Potential" and enjoy a standoff in "Sparks In The Dark" accompanied by quietly churning drums, and Lopez hand percussion once again.

As soon as guest horns join in, their presence casts the drums and bass in a supporting role, which perhaps devalues the concept, but does have the benefit of providing variation for the listener. On "Electrical Coil" trumpeter Jean-Luc Cappozzo proves largely a melodist as his trumpet drifts over the rippling basses. Duboc surfaces with a menacing pizzicato while Bankhead once more bestows a lyrical strain. The piece ends with a loose shuffle during which Cappozzo briefly quotes Miles Davis' licks over an emphatic rhythm.

William Parker appears on two selections which are unsurprisingly bass dominated. On "Relief Valves" he takes center stage between two pizzicato basses where he makes his instrument sigh and moan, then strums like an African guitar. Finally on "Free Power" saxophonist Lionel Garcin adds a more abstract aura. His overblown vocalized inflections and atmospheric alto multiphonics vie with sawing basses and pulsing drums. The album concludes with his saxophone incantation over roiling drums and Drake's powerful 4/4 groove.