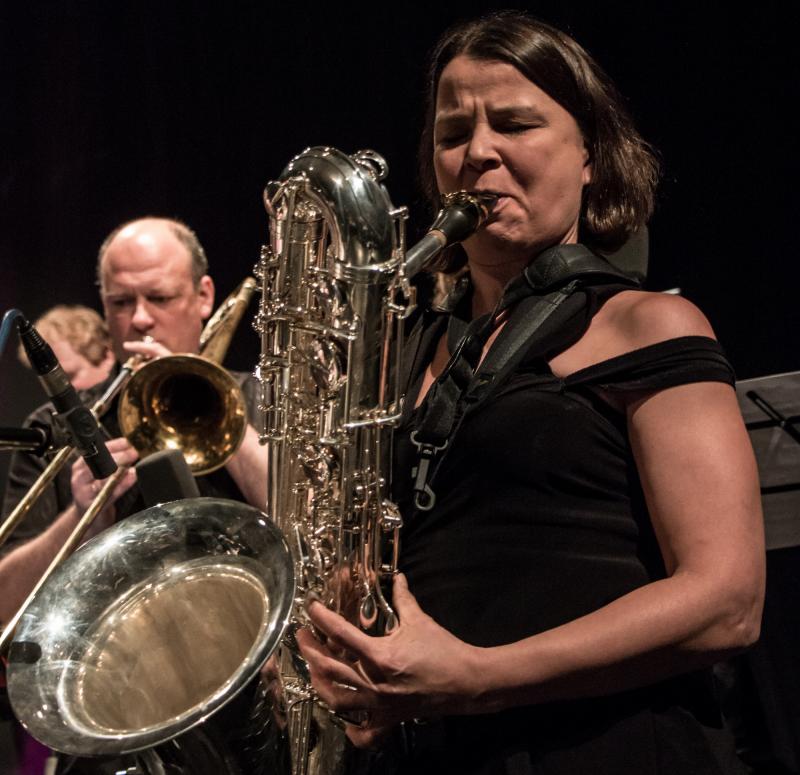 BY FRANCESCO MARTINELLI
December 29, 2015
Sign in to view read count

The music of the Ensemble Denada is among other things positively energetic, optimistic, funny, solar and listener-friendly
&#151Francesco Martinelli

I encountered the music of Helge Sunde several years ago, with his wonderful "Denada" Cd on ACT. I was impressed by the quality of the writing and by the seamless fusion of composition and improvisation, so I was especially happy to have the chance to hear the Ensemble a few meters from home, in the wonderful location of the S. Andrea Theatre—an 12th Century church now used as a space for the performing arts. The concert was the opening event of the Winter Concert Season of the Pisa Jazz organization, promoted by Francesco Mariotti with the support of the City Council of Pisa, an initiative which brings in town quite a lot of good music and merits support.

The space is beautiful but quite small for a biggish ensemble so I was also curious about how the band was going to manage the volume issue of combining drums, electronic, guitars and brasses in a confined environment: the result was very satisfactory, since the orchestra—which travels with its own sound engineer and high-quality equipment—was powerful but never too loud.

I am also happy to report that Denada Ensemble doesn't fall for the abused cliché of the so-called "Nordic sound." What could have been a marginal and superficial stylistic notation, through endless repetition has become a marketing ploy, to which some of the younger groups seem to have to oblige in order to access media and festivals. It's a cover-all label, easy to stick and no more meaningful than "black people have rhythm in their blood." Helge Sunde himself, presenting the humorous piece titled "Speed Couch" made a jocular reference to it; and irony seems to be a key component of his estetic. Italian musicians under many respects could have reasons to feel much more deserted lonely and depressed than their Scandinavian counterparts looking at the state of musical education and live music promotion in our country...

The music of the Ensemble Denada is among other things positively energetic, optimistic, funny, solar and listener-friendly, leading the listeners through a carousel of pieces—all by the leader, trombonist Helge Sunde -each based on a strong musical idea. The playing is virtuosic without apparent effort despite the high complexity of pieces like the mentioned "Speed Couch" and "Metervis"; the prevalent strong rhythmic drive and the precise playing differentiate the music from a more static, Gil Evans-inspired style of arranging-writing. Not that more delicate, timbre-based moments are missing, and in fact they are better offset by the muscular rhythms the band has fun with.

The writing and playing create a pellucid sound, where each contribution is clearly delineated within the general texture, almost never using classic big band techniques but on the contrary cleverly grouping the instruments in layers across the sections, for example with a bass line carried by bass saxophone and trombone while soprano and trumpets play a counter melody under the solo instrument. Improvised solos develop over changing backgrounds providing variety and inspiration, but the line between improvisation and composition is blurred, as players are evidently allowed or even invited to embellish their contributions under the right circumstances (i.e. when there isn't a tight ensemble writing that requires following the written line).

Typically humorous in Sunde's writing is how instruments jump out at the listener with unexpected, incisive phrases that cut through the texture, crossing the conventional line between solos and band. Almost all the members of the ensemble are also featured soloist, with a prevalence for the powerfully creative members of the saxophone section -the silvery, sinewy soprano saxophone solos by Frode Nymo was a special hit. Jens Thoresen on guitar and electronics mostly added textures to the background; the rythm section with Olga Konkova on piano, Per Mathisen on bass and Rune Arnesen on drums was very busy with the complex rhythmic contours of the pieces but delivered the goods when called to solo, especially on "Metervis"—the barycentric position on the bass on stage visually enhancing its musical role.

Some of the pieces were in fact inspired by a previous visit to other locations in Italy, so that Trieste and Alghero were celebrated with funny titles with "Valse Trieste"—a pun on Sibelius -one of the most pensive pieces of the repertoire, led by the warm tenor voice of Atle Nymo, and "Molto Alghero." A literary inspiration to Sunde came from the concrete poetry of Olav Hauge, he himself inspired to meditation by nature, and translated into two pensive, shaded compositions -"The Seven Winds" and "The Entire Truth," while one of the last compositions added to the book, "Same Wrapping New Shit" seemed to reference Gil Evans.

The audience that filled the venue to capacity was brought to enthusiasm when the requested encore turned out to be the title song of the band, "Denada," featuring Shannon Mowday who walked to the front of the stage with her bass saxophone delivering a rousing solo on a swinging piece that is a good example of what the Denada project is all about. If you have the chance to listen to them, don't miss it, and their CDs are well worth the search.