By Bruce Lindsay
August 9, 2013
Sign in to view read count 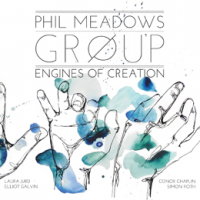 Good things happen on Engines Of Creation: things like imagination, inventive writing, great playing, a sense of humor, an awareness of economy. It's a heartening combination, especially as it arises from a group of young players who have only recently emerged onto the professional jazz scene.

Saxophonist Phil Meadows leads the ensemble and writes the tunes. Although he completed post-graduate studies at London's Trinity Laban he grew up in the north of England where he became aware of the LIMA co-operative—the Leeds Improvised Music Association, which featured imaginative players like pianist Matthew Bourne and bassist Dave Kane—and won the LIMA Bands Competition in 2008. With Meadows on the front line is trumpeter Laura Jurd, winner of the 2012 Worshipful Company Of Musicians jazz award. Jurd and pianist Elliot Galvin are two of the co-founders of the Chaos Collective, one of a growing number of musical collectives in the UK that are key to the development of some of the country's freshest musical ideas.

"Fin," dedicated to drummer Finlay Panter, opens with a blast from Meadows' alto. Along with the album's title track, with its portentous opening theme giving way firstly to free-form playing then to a piledriving slice of fusion-meets-funk, the tune seems to encapsulate the adventurousness of Meadows' Leeds heritage. "Flamingos"—written for Meadows' brother's wedding—is altogether gentler, its mid-section dominated by a bright, harmonically intriguing partnership between Galvin's piano and Conor Chaplin's double bass.

The electric band takes over on "Runner" which gets a punchy, assertive, performance from Galvin on Fender Rhodes, Chaplin on electric bass guitar and drummer Simon Roth. The drive and energy carries over to Jurd and Meadows' unison phrases and Jurd's fiery trumpet solo.

Engines Of Creation clocks in at a little under 40 minutes—refreshingly economical in these days of over-long releases. Such brevity helps to retain interest for the entire album and keeps the quality consistent. Even better, it doesn't outstay its welcome but kindles a desire to hear more. So, album number two please.