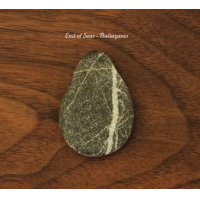 The bounding main knows no single shape, size, or direction. It's both timeless in nature and organic in its arc and flow. Greek guitarist Costas Baltazanis seems to intuitively understand those facts. His is a music that taps into the water's vastness, appreciates its beauty, respects and harnesses its strengths, and rides the ever-adjusting tides.

End Of Seas contains an aqueous assortment of music. Some songs are tranquil, others are full of danger, and all are unique in their unfolding and fluid means of expression. Instruments are set adrift in haunting and moody atmospheres ("After The Fight"), fusion ideals and postmodern sounds merge ("Berlin Sky"), African accents serve as a foundation for creation ("Nairobi Kiss"), and low-key slickness surfaces in surprising ways ("Harlem West"). And in the center of it all is Baltazanis' guitar, serving as a unique binding agent that's alternately solid and amorphous, cutting and calming, and completely captivating in the way it projects and progresses. It's an instrument that manages to be the bringer of joy, the bearer of sadness, and the painter of enthralling worlds.

Surname becomes band name here, which is completely fitting considering the fact that Baltazanis' comrades serve as different organs and systems that extend on his being. Dan Brantigan's warm-toned trumpet is the emotional center, bringing out the melodic soul in this music; pianist-keyboardist Isamu McGregor's sounds serve as sensory receptors, responding to what moves around them; and bassist Panagiotis Andreou, in league with alternating drummers Engin Gunaydin and Justin Tyson, serves as the heart of this unit. A number of other musicians—percussionist Rich Stein most notable among them—help to further flesh out the composer-leader's vision(s).

While there's a sense of finality in this album's name, the songs don't give off that same impression. The music of Baltazanis speaks more to the infinite nature of water than to the end of seas.