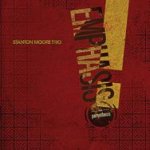 And Moore does it all without calling attention to himself at any point. On the opener, "(Late Night at The) Maple Leaf," his syncopated drum work is only one of a series of the track's highlights. Keyboardist Robert Walter takes swift turns on organ and piano before Will Bernard snakes in and out by means of some sinuous guitar work also heard on "(Smell My) Special Ingredients."

Moore and his band mates make no apologies for their devotion to hard rock either, so the heavy riffing that surfaces here offers some contrast to both composition and musicianship. Moore simplifies his usually detailed drum work to pound out "(Proper) Gander" and, on "(Who Ate The) Layer Cake," it's not just volume that distinguishes Bernard's guitar, it's the abandon with which he plays, an approach that Walter also shares on organ.

There is no bassist but plenty of bottom in the sound Moore co-produces with Mike Napolitano. The spacious quality of the recording makes it possible to hear the filigree of guitar as clearly as the nuance of the drumming. Effects, such as the looping on "(I Have) Super Strength," are used shrewdly too, as is the capture of group improvisation from which "Wissions (Of Vu)" is built.

Yet if Moore, Walter and Bernard weren't so technically skilled or fluent in such avariety of styles, the fruits of their collaboration might reside in the dolefully predictable rut of all too much funk. Instead, Emphasis! (On Parenthesis) is alight with a fresh camaraderie that exceeds the ambitious goals of the group's leader.