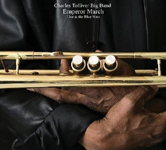 With Love (Blue Note, 2007) chronicled the return of the Charles Tolliver Big Band, one of the most progressive big bands of the Post-War years. Inspired in part by the vibrant creative energy of the burgeoning Loft Scene, trumpeter Tolliver and pianist Stanley Cowell's cooperatively led big band was immortalized by two landmark records, Music Inc. & Big Band (Strata-East, 1970) and Impact (Strata-East, 1975). After a quartet reunion gig with Cowell in 2002, Tolliver was encouraged by fellow trumpeter David Weiss to reconvene the legendary big band. Emperor March: Live at the Blue Note marks the first live recording of the newly revived ensemble, documenting two nights at the famed New York jazz club of the same name.

Consisting of new compositions, a venerable cover, and classics from the Strata-East days, Tolliver's multi-generational band burns with a fervor typical of younger groups. Incorporating an exhilarating mix of interlocking layers, sudden tempo shifts, and dramatic mood changes, this veteran ensemble negotiates Tolliver's cantilevered charts with the graceful fluidity of a unit a fraction its size.

The exotic "On The Nile" opens the set, culminating in an explosive statement from tenor saxophonist Marcus Strickland that scales Coltrane-esque heights of expressionism before spotlighting Cowell's jaunty runs and Tolliver's penetrating cadences. Tenor saxophonist Billy Harper unveils his own take on post-Coltrane tradition on a stirring interpretation of "I Want To Talk About You," complete with a harmonically bold cadenza.

The title track was inspired by the film March of the Penguins, which documents the almost insurmountable odds faced by Emperor Penguins to persevere in a hostile environment. Unveiling a series of opulent theme and variation based solos, the tune's driving march rhythm is enriched by a mellifluous horn chart dominated by flutes and trombones. The same dulcet instrumental tonalities drive "Chedlike," a swinging ode to Tolliver's son Ched, with a lyrical contribution from the leader. "In The Trenches" and "Toughin'" are staples of Tolliver's quartet, Music, Inc., with the former a punchy blues and the latter a brisk swinger featuring most of the band in brief, boisterous solo spots.

Emperor March: Live at the Blue Note is a welcome reminder of the visceral intensity a contemporary big band can generate. Bolstered by intricate arrangements and dynamic writing, this live set captures Tolliver's big band in all its glory.

On the Nile; I Want to Talk About You; Emperor March; Chedlike; In the Trenches; Toughin'.