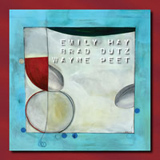 A summit meeting of West Coast talent, this self-titled release features flutist Emily Hay, keyboardist Wayne Peet and percussionist Brad Dutz blending styles and genres into an unclassifiable mix. With a truly empathic sensibility, these three interact with subtle restraint on a remarkably cohesive selection of improvised pieces. Despite the lack of prewritten material, the predominance of strong melodies, solid rhythms and harmonious interplay is a testament to their virtuosity and adaptability.

All three musicians share a similar aesthetic. Each is a long-standing member of the left coast's creative music community, with memberships in numerous line-ups and ample session work. With inspiration gleaned from seemingly unlikely sources and free from their usual responsibilities, this unstructured setting allows their creativity to develop unimpeded.

Hay plays flute and alto flute, and also contributes wordless vocals. Her flute playing varies in approach, depending on the mood. On "Bean Dip" she alters her tone to resemble the breathy timbre of a shakuhachi, lending it an exotic quality. "It Can Be Thick" features a darker, piercing sound, invoking Robert Dick's expansive pitch control at points. Her wordless vocalese combines the extended techniques of Meredith Monk with the spry chutzpah of Shelly Hirsch, as she sputters, wails and hisses with glee. Her sinister delivery on "Coming!" is accompanied by Peet's haunting organ and Dutz's sparse percussion, evoking a dark and threatening mood.

Peet switches back and forth between piano and organ, with a few waves at a theremin for good measure. The driving piano motif on "Hot Japanese Water" conjures images of a film-noir soundtrack, full of intense locomotive power. On "It Can Be Thick" his organ summons the ghosts of early fusion, simmering with a muscular, Bitches Brew-inspired vibe.

Politely chamber-esque in spots, assertive and caustic in others, the trio drifts easily from one mood to the next, transitioning between them with grace. Mature and considered, this adventurous but accessible recording is a potent reminder of the viability of the occasionally over-looked West Coast improvising tradition.