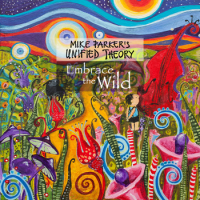 New York bassist Mike Parker leads an international quintet based in Krakow, Poland where he has been residing for the last two years. This is his second album with this band and already shows signs of great things. Kicking off with "Kobra Kai Dance Remix" this is pure post-bop jazz tinged with eclectic influences—Ornette, Mingus, M-Base and more—Parker's solid, insistent bass line here intertwines with intricate ensemble passages. "Hopped.Up.Pop" starts quietly enough with horns but a resounding bass figure introduces a brisk and complex ensemble arrangement with a robust Parker bass solo. Horns are heard to the fore on "Hermit The Dog," all the while underpinned by a growling ascending bass motif and there's some terrific tenor soloing from Slawek Pezda.

"Sendoff For Sendak" opens with lugubrious arco bass which introduces a pastoral horn-led theme, with momentum built over satisfying, sympathetic collective solos until an ending wrought by a majestic ensemble reintroduction of the theme . "Piwo i Bona" is a funky workout, some brief spoken Polish heralds screeching horns and a bass and drums-led groove worthy of the Brecker Brothers and benefitting from deft trumpet, screaming tenor and chunky bass solos.

The "All Saints" three-part suite begins tentatively in the short-ish first movement , with a delicate contrapuntal horns arrangement, this consolidates substantially in the second movement, the pace picking-up and adorned by some scorching sax and drum soloing. The third movement is a more sombre resolution driven by plangent trumpet lines, haunting lyricism and rejoined by the ensemble to a partial finale, closely followed by a surprisingly upbeat coda.

This is a confidently assured album from a band of extremely talented musicians who gel well together and which benefits from Parker's mature and imaginative compositions and skilful arrangements. More please.