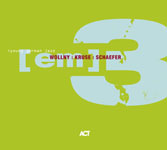 Despite the belief, in some corners, that jazz as an American form has to contain certain traditional and specifically cultural components in order to make it jazz, globalization has resulted in artists examining sources farther abroad to place in an improvisational context. The four year-old [em] brings an impressionistic European classicism to [em] 3, but in a way that moves the spirit of composers including Igor Stravinsky, Edvard Greig and Gyorgy Kurtag into territory embracing of democratically conversational improvisation and harmonically sophisticated but oftentimes abstract lyricism.

Released as part of the German ACT label's Young German Jazz series, the members of this piano trio may indeed be young, but there's a maturity to their playing that matches that of other youthful European trios including Polish pianist Marcin Wasilewski's Trio (ECM, 2005) and Norwegian pianist Tord Gustavsen's trio, heard most recently on Being There (ECM, 2007). But while Wasilewski's approach to freedom remains closer to the center and Gustavsen's spare, gospel-informed approach explores the surprising diversity found in slow-to-medium tempos, [em] favors an equally economical but considerably darker subtext.

Even when the group's melodicism is undeniably singable, as it is on pianist Michael Wollny's "Grieg's last bow," it's merely a stepping stone to brooding spontaneity, with Wollny favoring the low register, bassist Eva Kruse only occasionally emerging from the shadows and drummer Eric Schaefer creating a tenuous textural landscape. Still, on Schaefer's "Gravite," the trio tackles what is at first a complex construct that quickly shifts once again into a freer exchange. Ultimately though, it carries a propulsive rhythm where Wollny's distinctive blend of advanced language with neoclassical form results in one of [em] 3's finest moments.

Kruse and Schaeffer may be relatively unknown, but Wollny has already built a strong reputation working with veteran German saxophonist Heinz Sauer. [em]'s selfless approach to the music- -thirteen original miniatures dominated by Schaeffer's seven compositions, unusual for a piano trio where the lion's share typically comes from the pianist—doesn't detract from individual strength and collective chemistry. Wollny's episodic "Monsters: Symmetriads" moves from an ethereal opening to its more dynamic second section, where Schaeffer's heartbeat pulse and Wollny's repetitive chordal pattern provide a foundation for Kruse's rich arco, before turning outward for a final section driven by Shaeffer's powerful beat and Wollny's gradual extemporization of the composition's base theme.

The consistently gripping [em] 3 amply demonstrates Germany's vital young jazz scene. More importantly, however, is that a foundation in adapting near-Jungian cultural roots is evolving a new variant of jazz which may have little in common with the American tradition but, if labels are truly necessary, cannot be considered anything but jazz.