By Dan McClenaghan
August 1, 2009
Sign in to view read count 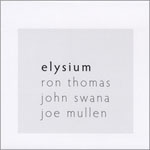 The sound of Elysium is, in a word, otherworldly. Then throw in the electro-industrial tinge and cold liquid submersion resonance—like the noise of a high tech blacksmith shop on a distant planet with a dense atmosphere and heavier than Earth gravity like Neptune—music of an alien culture, or songs played for cryogenically suspended astronauts slumbering their way across vast expanses of space.

Such are the sounds created by keyboardist Ron Thomas, trumpeter John Swana and drummer Joe Mullen.

Thomas, in acoustic piano outings, is a man of a supple touch with self-proclaimed "deep technical and pragmatic musical ideas" that result in very beautiful and approachable music on discs like House of Counted Days (Vectordisk, 2003), Music in Three Parts (Art of Life, 2006) and Doloroso (Art of Life, 2006). But Thomas and band mate Swana are no strangers to plugging in, with Cycles (Vectordisk, 2007) featuring the same players, same instruments and same sound, but with more of a focus this time around. Pianist Thomas is heard here on synthesizers. Swana uses an EVI, an electronic valve instrument, while Mullen is on acoustic drums that somehow echo with an eerie reverb. With Swana and Thomas, it's hard to tell who is doing what—in an approach that is similar to that of Miles Davis' On the Corner (Columbia Records, 1972), pared down and minus the funk and groove.

Elysium consists of three extended pieces, the titles of which are variants on poem titles from the Tang Dynasty period of Chinese poetry. Whether there is any connection between said poems and the music is anyone's guess. What is certain is that Thomas and company are exploring new ambient territory, and creating an oddly mesmerizing sound.