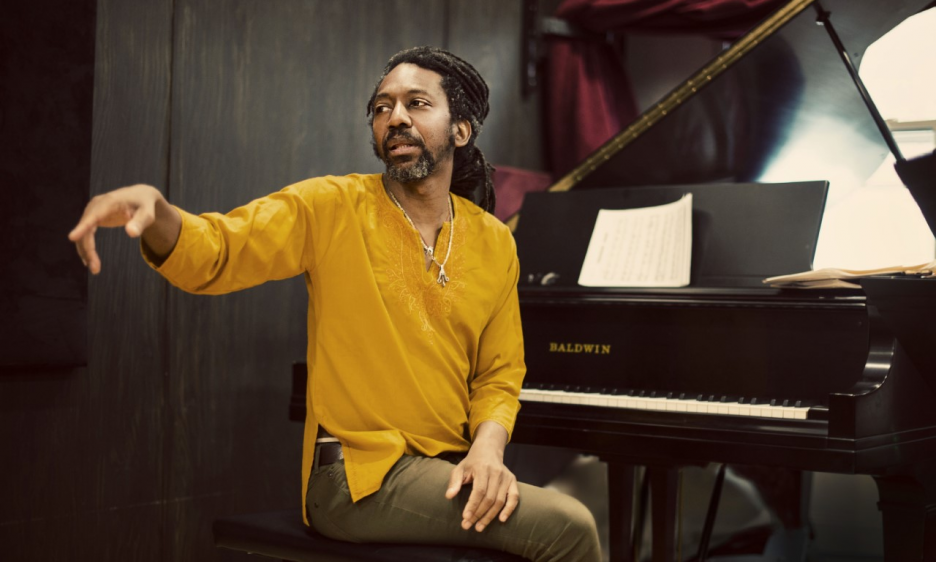 My main interest is to write a strong piece of music that could stand on its own, without the need of a soloist. When I’m composing I think more like a classical composer than a jazz musician.

The setting was Systems Two, a well-known, state-of-the-art recording studio in Brooklyn. The sessions, occurring over five days in May (7-11) 2017, were set up to record Cuban pianist/composer Elio Villafranca's sixth album, the elaborate and thoroughly rehearsed double-CD Cinque (artistShare), the music previously performed in shows at Lincoln Center in 2015.

As for the sessions themselves, what emerged from day to day remained fairly consistent: long stretches with breaks interspersed for meals and musician rotations, the overall tenor of the sessions being somewhat serious, focused yet laced with a mix of laughter and looseness. Villafranca seem to spend as much time behind the glass, if not more, conducting from behind the main mixing board, entering the attractive, wood-paneled studio when the music required his piano playing. Organized and flexible, with multiple tasks to attend to, Villafranca the leader received superb technical support from sound engineer/studio owner Mike Marciano and Jazz At Lincoln Center's Jason Olaine.

The recipient of a 4.5 star review from DownBeat and winner as Rising Star on keyboards in the magazine's August Critics Poll issue, Villafranca was more than enthused to wax on about the creation of this epic production.

All About Jazz: Where do you get your ideas, from thematic material to instrumentation? And do you consider this new project to be consistent with previous efforts, or a real departure?

Elio Villafranca: My ideas for thematic materials come from a variety of sources, although I can safely say that my main three are Afro-Caribbean music, classical music and jazz. I find myself coming back to my early childhood memories where I was exposed to the drum for the first time, in a form of Congolese music know as tambor yuka. This form of music is very rare in Cuba and it is only practiced in a few towns in the region of Pinar del Rio, such as "El Guayabo" in San Luis where I was born. The drums used to play in this tradition are made out of the trunk of the avocado tree, which is carefully hollowed out, then an animal skin is nailed to one of its ends. Also studying at the Instituto Superior de Arte in Havana in Cuba heavily influenced my approach to composition and instrumentation as well as thematic materials. During my years there, half of my teachers were Russian and the study of Russian classical composers was at the forefront of my musical education. One thing that I rarely mention is my early education in visual arts and guitar. My first contact with the arts was through painting. I was born near a Casa de Culture, where I received early training in visual arts before picking up the guitar. I love the concept of colors which I try to transfer into my music by exploring with different instrumentation formats. The idea of colors, in combination with my classical music training, informed my selection for the instrumentation for this project, composed of alto and soprano saxophones/flute, tenor saxophone/clarinet, trumpet, trombone/shells, and bass clarinet.

Ever since I arrived in the U.S. in 1995 I have been fascinated with the range of musical possibilities in jazz. The idea in my first recording project, Incantations/Encantaciones [Universal Music Latino, 2003], was to reflect the nostalgia of having to leave my country of origin. But even then I started to present the idea that Afro-Caribbean music shares the same roots with jazz. My album Caribbean Tinge [Motema, 2014] is my latest work in which I emphasized this point even more in pieces like "Caribbean Tinge," "Sunday Stomp by Congo Square," among others. Now, in regards to Cinque, I consider this project to be the embodiment, or culmination of this argument, and how my exposure to different forms of Afro-Caribbean music, especially Congolese music, classical music and jazz, shapes my artistic voice. I have made the point to focus in the Congolese traditions while creating a project that reflected our heritage and the wide variety of rhythms from the Caribbean. Among the rhythms I covered include tambor yuka from my hometown, bomba from Puerto Rico, guaguanco from the Cuban rumba, bata from the Yoruba tradition, palo and salve from Santo Domingo, palo muerto, Haitian danza, Afro and conga from Santiago de Cuba, and others.

AAJ: How did you write with each of the islands in mind?

EV: The inspiration to write about these islands came from the story of Joseph Cinqué, a West African man of the Mende people, born in Sierra Leone who, in 1839, led a successful revolt aboard the slave ship La Amistad after being captured illegally and brought to Cuba to be sold as a slave to sugar plantation owners. Containing five separate movements, Cinqué showca ses the cultural diversity of the five Caribbean islands of Cuba, Puerto Rico, Haiti, the Dominican Republic and Jamaica, while simultaneously highlighting the African traditions woven into the fabric of each of these nations via the forced migration of Africans to the Americas. I chose five related stories, one from each of the islands that inspired me for the creation of the five musical movements. Each movement focuses on the influences of the Congolese fundamentally, and other traditions of rhythms, melodies, and dances through exposing their unifying music and culture, despite their diverse histories.

Cinqué is a work that encompasses comprehensive field research of music and rhythms of the Caribbean and my rich Cuban musical heritage, fully encapsulated within the classical music canon and the language of jazz.

We live in a world of labeling, and when the term 'Latin Jazz' is presented, only a few musical forms come to mind from the Afro-Cuban palette—i.e., yoruba, rumba, and son. But the Caribbean is a region very rich in history and musical traditions, in which the Congolese, despite its unfamiliarity, is one of the most influential. As previously mentioned, my roots are in Congolese music, so I wanted to focus on different manifestations of this tradition throughout the Caribbean. I was not familiar with the tradition of Congo music in Haiti, so in preparation to developing the music, I traveled to that country and visited the Lakou Badjo in "Cap Haitian" and other Lakous in Limonade, Port au Prince, to experience firsthand their own versions of congo, rada, and voodoo religious/music practices. I also previously visited the island of Puerto Rico to experience their Congo-rooted tradition of bomba. Santo Domingo shares similar Congo traditions with Haiti and Cuba such as palo, and palo muerto. These research trips provided me with the information to create the musical concepts for this project.

AAJ: Apart from your piano playing, how did you decide to orchestrate, when certain players would solo, ensemble passages, and shifts in instrumentation?

EV: Solo sections are the last thing I think about when I'm creating a new work. My main interest is to write a strong piece of music that could stand on its own, without the need of a soloist. When I'm composing I think more like a classical composer than a jazz musician, and once this first phase is done, then I consider developing a solo section, backgrounds, and what would be the best instrumentation for the music. Deciding who the soloist are in a particular piece is a different process. I carefully choose the soloist depending on a particular sound and message I want to create in the music. For example, in a movement section "The First Colony," I wanted to musically represent the first encounter between the Maroons, who were fugitive black slaves, and the few Native American Taino or Arawak people who survived the Spanish invasion by hiding in the hills and creating the first colonies of free people. In this case, I asked Steve Turre to play the shells over the Congo-derived rhythm called salve. Another example is the type of harmony I used in the section called "Night of Fire: Burn Down the Field." This part was inspired by the 1730 Jamaican revolt known as "The First Maroon War," which was led by the great Maroon leader Cudjoe against the original British colony of Jamaica. "Burn Down the Field" was the order Cudjoe gave to his army of Maroons after freeing the slaves from a sugar, coffee, or indigo plantation.  I used the high register dissonant chords in this section to give the impression of fire burning houses and plantations, while the rhythmic combination of cha-cha-cha played in the congas with an specific bass line creates the feeling of Maroons hiding in the sugar plantation with torches. While I have an ensemble with a wide range of musical possibilities, I'm also careful not to overly orchestrate the music because I also enjoy the concept of transparency and space in the music.

AAJ: As for personnel, the process of picking who you picked, including your later additions... why them?

EV: A large part in the creative process went into selecting the musicians, researching materials and traveling to places to experience the culture firsthand, with the sole intention to share with my supporters a product of artistic integrity and authenticity. Similar to Duke Ellington, some of the music I write is with a specific sound and musician in mind. The first step is to select a group of musicians who you have a good relationship with and can best deliver the artistic statement I aim to present. For Cinque, I wanted to have a band composed of musicians with different backgrounds and heritages. It was important for me to have musicians from the islands I was representing in order to create the most authentic sound in the music. Some of the music included in Cinque is religious-based; therefore, I feature members of that specific religious group or community. In the band I featured musicians/percussionists from the islands of Cuba, Haiti, Puerto Rico, Santo Domingo as well as leading jazz musicians from the U.S. This way the music always swings, no matter which style is being played, jazz or Afro-Caribbean.