"Those are extraordinary experiences," she adds.

Anyone who says there's no handbook for raising boys has not met Dr. Eli Newberger. As a pediatrician who practices at the boundary between medicine and psychiatry; Eli has probably published more work in psychiatry than pediatric medicine, not the least important of which is his 1999 book The Men They Will Become. He describes this seminal work as "a guide to guiding character development, and prevention of mental disturbance in males from birth to young adulthood."

Intended for parents and professionals alike, it is still in print some 10 years after publication. This literary longevity attests to the book's significance, and is a credit to the publisher Da Capo Press, which has sensibly placed it in its Lifelong Books series. The book comprises anecdotes and expert analysis and commentary about the process of raising boys through adolescence. Important work, and as occurs with all his projects, it is done with depth and caring.

Although he is encamped in two professions today, there was, in fact, a point when Eli Newberger had to choose between music and medicine, and the decision was a practical as well as personal matter.

The revelation came during his sophomore year at Yale, where he was a music theory major. Although he also plays piano, the only instrument where he believes he plays at a high professional level is the tuba. By the time he was in his second year at Yale, he had played most of the classical repertory for tuba, and could compete for a classical job. But, he figured he would be bored, as the job of a tubaist in a classical orchestra comprises "mainly counting rests."

In other words, not a lot of notes to play.

On the other side, while he is a good jazz pianist, he still considers himself a better tuba player; and, the job prospects were not good, for either a middling pianist or a tuba player regardless of skill level.

The career choices, then, were between classical (lots of rests) and jazz (lots of rest) —neither of which was very appealing— and something else.

"I knew that if I went into medicine, I somehow would always be able to play music." The converse prospects, a career in music and a sideline in medicine, weren't realistic.

The following year, the leader of an undergraduate jazz band in which Newberger had played fixed him up on a blind date to go to a gig in New York. The date was a Carolyn Moore, a sophomore at Sarah Lawrence. She was "a wonderful date" who has turned into a wonderful date for the 46 years that they have been married, plus the two years of courtship.

Carolyn studied art briefly as a Freshman, but by the end of the semester she concluded, and her teacher concurred, that "I had a facile hand but lacked an artist's mind." She left that course, a move that she now considers "a youthful mistake, I was insecure and didn't know what I wanted to do in life. I didn't have a goal."

Through serendipity, after doing fine in college and graduating and doing a lot of work and study in literary analysis, "we realized that we needed to support ourselves." Eli was going on to medical school; Carolyn, a year behind him, finished her senior year and became a teacher for four years. That led her to child development, and to the discovery that she loved working with children.

They joined the Peace Corps for two years. Upon returning, Eli joined the pediatrics faculty of Harvard Medical School. His research, clinical philosophy, and many publications reflect a deep devotion to improving the protection and nurturing of children and to strengthening parent-child relationships. They have been acknowledged with numerous local and national awards.

After returning to Boston from their stint in the Peace Corps (with their infant daughter), "it was natural to apply to grad school at Harvard," Carolyn recalls. She earned a doctorate in Human Development, and trained in clinical psychology at the Judge Baker Children's Center and Children's Hospital, which are affiliated with Harvard Medical School. After completing her graduate training, she continued at Harvard Medical School and Children's Hospital in clinical and academic roles doing research, teaching, and clinical practice, "Finding things as I went along that were fascinating and exciting, tapping into things that I really cared about. But as an undergrad, I hadn't a clue."

At 18 years of age, Carolyn lay down her pencil and brush for two human generations. She returned to art in 2003, after reluctantly accepting a friend's invitation to attend a week-long painting seminar.

"When I first squeezed pigments from their tubes onto my plastic palette, tears came to my eyes," she recalled. "Then, when I dipped my wet brush into paint and swirled forms on the white paper, I felt relief, as if I were finally coming home."

It was like a revelation, a eureka moment: "This is what I am supposed to do." The conversion was quick and sure. Now, she may awaken mid-sleep, thinking about art, about things that might be amiss in a painting. "Being an artist was in me, but I had to re-discover it. It's like I started a new life," she says.

Carolyn's studio in their suburban Boston home is a monument to the variety of her views. Still lifes, nude portraits, beautiful flowers, profiles of native peoples from their trips to Africa. And, one favorite, inspired by Eli's musicality: their granddaughter trying to play his sousaphone, looking quite serious but dwarfed by the instrument, which surrounds the young, would-be musician.

Although she abandoned art for most of her adult life, she never put down the flute for very long, even though spending many of the interim years going to grad school and then raising a daughter. After that came her demanding career as a child psychologist, juggling this with doing grant proposals, research, and teaching around the world. She's even been on Oprah.

Writing a full-length book was challenging, sometimes competing with his regular night gig at the famed Sticky Wicket Pub in Hopkinton, Massachusetts, where the Black Eagles held sway every Thursday. And, while it is only Eli's name on the book cover, he is quick to acknowledge Carolyn's contributions. Although Eli has never shrunk from difficult conceptual tasks, this was an order of magnitude more ambitious than a thesis or scholarly paper. Some of the research papers on which they jointly worked became foundation for some of the thinking in The Men They Will Become, such as "The Social Ecology of Malnutrition in Childhood," knitting broad cultural themes to malnutrition.

What was the motivation for the book? "I wanted to re-think the notion of boys' character," said Eli. He had to do lots of research and interviews, and he wanted the book to be written for a lay audience of parents and teachers. "Carolyn played a vital role in the book. She takes a resourceful, daring approach to child psychology and cognitive development," he said. A chapter in the book, The Roots of Character, makes use of her theory.

The book doesn't have much jargon, it is written for people who are trying to understand boys and their development, and the main tasks of forming fine character in boys, through the first two decades of life. He summarized the principal messages from his book in a paper he presented at the White House Conference on Helping America's Children, in 2005, entitled "Strengthening the Characters of Boys: What We Know and Can Do." A video of the presentation, with an illustrative story and music from his jazz idol, Louis Armstrong, is on Eli's website, www.elinewberger.com 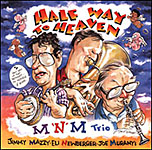 The book took about two-and-a-half years, from signing the contract to submitting the manuscript in early 1999. Coincidentally, at that same time he got a call from the pianist Butch Thompson about a return gig to a place in Rockport, Maine. Eli got the idea of doing an album of pieces on the same theme as the book: male development.

The tracks they recorded betray (or at least chronicle) a variety of human frailties, such as: "It's a Sin to Tell a Lie"; "If I Let You Get Away With It Once (You'll Do It All the Time)"; "Ain't Much Good in the Best of Men These Days"; "There'll Be Some Changes Made"; "Miss Otis Regrets (She's Unable to Lunch Today)," and the like.

A fascinating concept, the CD can also be appreciated at its most basic level of entertaining music, with Newberger, Thompson, and vocals by banjoist Jimmy Mazzy, with whom Newberger still performs on occasion. He updates his performance schedule, CDs, and other news at www.elinewberger.com.

Performances these days will feature Thompson when the pianist comes east. Other times, he is more likely to be playing with his Jazz Tuber Trio, with Mazzy and the remarkable reedman Ted Casher. The group is a popular attraction for benefits and private parties, as well as the more typical jazz gigs.

As to the book, it is still extant after all these years, and has provided Eli with a welcome transition from almost a full-time focus on trauma and its events to a whole new set of teaching opportunities. He is now "less burdened by the stigma and unpleasantness of working in the abuse field," and spends more time lecturing, researching, and consulting.

Meanwhile, he has become a trustee at the Berklee College of Music, not least because of his interest in their new music therapy program, which is now the largest in the U.S. He has started to conceptualize an edited book on music and trauma, directed towards music therapists and trauma specialists.

So, a definite link emerges between book and music, and medicine and music. One would expect no less from someone who had the aptitude and drive to make a career in either discipline.

Why do they do all this? The mountain climber does so "because it's there." The Newbergers have quite different motivations for their callings. If the writer can be permitted an amateur psychoanalysis, perhaps they are engaged in medicine because they know they can make a difference, and in art because they must...they have no choice.

Reader, patient, parent, music fan, or family person, the individual who has encountered Dr. Eli Newberger and Dr. Carolyn Newberger has much of note (and notes) to contemplate, as we behold the adults they have become.

All Photos Courtesy of Eli Newberger