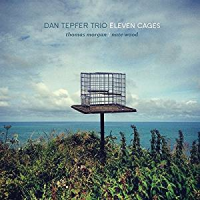 Pianist Dan Tepfer makes an excellent point here, reminding us that the concept of freedom is actually built on architectural stability. With Eleven Cages Tepfer has his Thomas Merton moment, likening the framework of each song to the walls of his newfound freedom. He recognizes and emphasizes the fact that different structures are housings for exploration and creation, not handcuffs on the imagination or rigid dictates in design methodology.

Tepfer's well-formed views on the permanence and plasticity of time guide his trio's explorations across this album. Each piece toys with seemingly paradoxical rhythmic truths in fascinating ways without coming off as too academic or painting itself into a "math music" corner. There's truly an organic sense to the manner(s) through which this trio merges intellectual curiosity with emotional expression. That's clear in the way rhythms coalesce, part ways, and produce tension (and some release) on "Converge"; it's obvious in the way this trio takes to the shadow dwelling dubbed "Minor Fall," where everything breathes with a sense of wonder; and it's notable on "Hindi Hex," where Tepfer's variable touch and articulate expressions on the piano are put to good use in a North Indian-influenced environment.

Tepfer's trio mates—bassist Thomas Morgan and drummer Nate Wood—are ideally suited for this work. Both men line up perfectly with the Tepfer aesthetic on this album, fully bending time to their collective will without ever losing focus on the need to dig deeper into the soil of a song. These three impress throughout, whether dealing with metric twists on numbers like "Roadrunner" and "547," toying with the concept of elasticity on "Little Princess," moving into the unknown on two "Cage Free" improv endeavors, or dissecting the musical principles and lyrical intent behind Beyoncé's "Single Ladies" and Gershwin's "I Loves You Porgy." They prove that cages need not threaten the artistic soul.