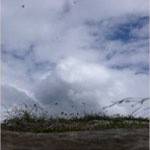 Electricals is the fourth album by the EKG duo of Kyle Bruckmann and Ernst Karel (EKG stands for the Ernst and Kyle Group). It follows Group (Formed, 2006), their collaboration with Giuseppe Ielasi in which the three integrated analogue electronics and acoustic instruments into a coherent whole, giving the electronics a remarkable feeling of humanity and warmth.

Now Electricals successfully repeats the feat. This album and all of its tracks are appropriately named, as their titles all seem to relate to electricity in some way. At times, the music includes those unwanted noises that sound systems are wont to produce in the presence of electric fields and such. Rather than that creating a random noise environment, EKG creatively sculpt such hisses, hums and pops into an integrated piece with the sound of their wind instruments. Paradoxically, the wind instruments often play sustained notes, leading to tones that could be electronic in origin.

Starting with studio or live recordings of duo improvisations, Bruckmann and Karel edit, mix, extend and assemble them into pieces that almost warrant the description "compositions."

To the duo, it seems important that they use analogue and not digital electronics; partly this is for historical reasons—their affection for the electronic studio sounds of the '50s and '60s—and partly for the sense of hands-on interactivity that using analogue electronics brings. Both reasons help explain the humanity of their electronics compared to some laptop-produced sounds. For comparable examples, think of the differences in sound between acoustic and electric guitar or between double bass and bass guitar.

The connectedness of the track titles emphasizes the unity of the five tracks. While not forming a suite, the end results hang together well and make for fascinating and engaging listening.