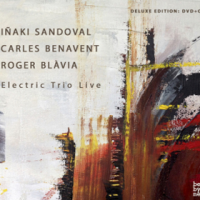 At the heart of Electric Trio Live from Barcelona-based keyboard player and composer Iñaki Sandoval, there's a feeling of warmth. Whether it's Sandoval's own electric keyboards, Carles Benavent's 5-string electric bass guitar or Roger Blàvia's drums, each instrument has a full, rich sound that lends the recording a welcoming, friendly, feel.

Sandoval was born in Pamplona and educated in Barcelona's Liceu Conservatory (where he now teaches on the jazz program), Berklee and the University of Nevada in Las Vegas. His discography is relatively short—just three other albums—but his work is always of a high standard, characterized by beautiful, often affecting, melodies. Electric Trio Live features tunes from each of the previous albums, recorded for the first time with Blàvia, one of Spain's most in-demand drummers, and Benavent, long-term associate of Paco de Lucia.

The album, produced by Sandoval, was recorded at Barcelona's Teatre d'Argentona on May 10 2014—the sound quality obtained by Sandoval and engineer Pere Pons Fabrés is excellent. The DVD of the concert, part of this deluxe edition package, includes two additional Benavent compositions, "Bluestorius" and "Tirititran." Like the CD, the sound is top-notch.

"No Excuses" and "Miracielos" both appeared on Sandoval's excellent acoustic trio album Miracielos (Bebyne Records, 2012). In the hands of the Electric Trio "Miracielos" gets a little funkier, with more emphasis on the groove: on "No Excuses"—given a gentle swing by Billy Hart and Eddie Gomez in its acoustic form—Sandoval is more considered and reflective while Benavent and Blàvia add a contrasting flamenco-influenced rhythm.

There's a cinematic quality to "Meet You At Trident In 15 Minutes" (which actually lasts 13 minutes and 49 seconds). Benavent and Blàvia lay down a relaxed, fluid, beat and Sandoval's electric keyboards—an '80s style synth sound followed by electric piano—construct the narrative. It rounds out another fine album from Sandoval—indeed, another fine album from just some of the jazz talent to be found around Barcelona.