By JOHN KELMAN
September 25, 2008
Sign in to view read count 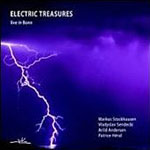 It's not uncommon to find bassists and drummers who work together so well that they become almost inseparable; often hired together because of their distinctive simpatico. It's rarer to find full groups with their own signature, expanding their vernacular by recruiting others for alternate ideas. Trumpeter Markus Stockhausen, bassist Arild Andersen and percussionist Patrice Heral have been working together since 1998 but, despite a singular aesthetic, it's their guest collaborators who have helped build a small but diverse body of work; each project blending recognizable elements and fresh perspectives.

Electric Treasures is the first time they've recorded with a keyboardist. Karta (ECM, 2000) was a largely spontaneous and more electrified affair with guitarist Terje Rypdal, while Joyosa (Enja, 2007) focused more on composition; featuring acoustic guitarist Ferenc Sentberger, with whom Stockhausen also recorded the lyrical Streams (Enja, 2007). Recorded live with keyboardist Vladyslav Sendecki, Electric Treasures shares more with Karta's in-the-moment spontaneous composition. Unlike the ECM disc however, where seven of its eleven tracks were culled and shaped from a ninety-minute free improvisation—yet were still each remarkable for their sense of individual completeness—Electric Treasures documents an entire performance from start-to-finish; a document of exactly what went down.

With little in the way of advance planning, Electric Treasure is all the more impressive for the quartet's ability to pull true form out of the ether. While vamp-based pieces act as striking vehicles for the quartet's stylistic diversity—ranging from unfettered free play and hard-swinging modality to hip-hop inflected grooves and dense, post-Miles jungle rhythms—it's when they create song-like structure that the true meaning of spontaneous composition becomes clear. Abstraction and electronics-filled landscapes turn "Electric Treasures Ten" into a stunning blend of texture and ethereal melody, but it's Stockhausen's thematic lead-in to "Eleven" that—with Andersen and Sendecki picking up on the trumpeter's implicit changes—makes it a poignant culmination to a two-disc set that, even at its most oblique, remains eminently accessible.

Stockhausen's range has never been captured so completely on a single release, moving from a rich acoustic tone to fiercely processed tonalities and the occasional brash tinge; effortlessly flowing from singable melodies to fiery post-bop phrases. Andersen, a double-bassist who cites the late electric bassist Jaco Pastorius as a seminal influence, seamlessly integrates processing and loops into a virtuosity that never sacrifices substance for style. Heral not only locks in with Andersen as if they were joined at the hip, but allows the music to take unexpected shape as his textural breadth combines with a wildly encyclopedic understanding of pulse, spanning cultures and decades. Sendecki is just as moving, a strong soloist with no shortage of the jazz tradition at play, but equally comprised of influences ranging from classical romanticism to ambient sonorities and transcendent impressionism.

Together, Stockhausen, Sendecki, Andersen and Heral make Electric Treasures a journey that can be taken as shorter side-trips, but is far more successful when absorbed in its entirety; ninety minutes of spellbinding and enlightening interplay all the better when experienced with eyes closed, ears open and mind unhindered by preconception.