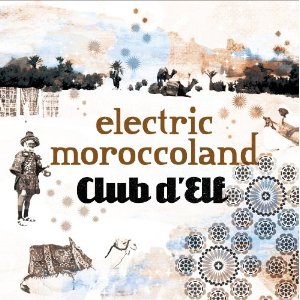 Even in our far-reaching and cluttered modern musical culture, it seems safe to suggest that there is no other band quite like Club d'Elf, a floating riverboat gamble with a fluid cast of contributors—keyboardist John Medeski, guitarists Reeves Gabrels and Duke Levin, Mat Maneri on electric viola, turntablist Mister Rourke, and many others among them—steered by bassist Mike Rivard and Rivard's longtime co-explorer, multi-instrumentalist and musicologist Brahim Fribgane.

Electric Moroccoland, the first disc in the new two-CD package, is primarily informed and inspired by Rivard's devotion to the rich musical heritage of Morocco and the region's three-stringed, camel-skinned sintir (their version of the bass) and oud (an Arabic lute). "The crux of Moroccan music is trance," Rivard has explained. "Trance as a quality in music has always attracted me, whether it's an extended James Brown cut, or something by Fela [Kuti] or Steve Reich. I've always sought out music that allows you to forget where and who you are and to break free from the mind's constant chatter." When Rivard speaks of the beauty of trance, the contemplative (but not peaceful), repetitive deep grooves of "Ambib" and "Instar" from Electric Moroccoland back up his talk.

After "Sand," a freewheeling space-rock jam dedicated to the late Mark Sandman, Rivard's friend and leader of the underground band Morphine, the band twirls into "Ghir Khoudouni," a double-decker sandwich of liberating chant and mesmerizing jam. "Sidi Rabi" transports you into a scorching, sandy desert that bursts into vibrant music and sound. Rivard creates an authentic Arabic rhythm simply by moving the "one" closer to the "three," and leads a throbbing, tumultuous jam that pulls blues power out from Middle Eastern music through his bass line.

By similarly keeping the same bass notes but rearranging their respective beats, Rivard reshapes "Sunshine of Your Love" into a Moroccan blues and yet retains just enough of the framework so your ears can track back to Cream's original blues-rock classic, too.

The funky organ and guitar jam "Bendir Done That" steers Electric Moroccoland in the direction of small organ/guitar combo rhythm and blues that grows in mass and complexity as Club d'Elf's cadre of companion instruments climbs on board and yet retains the sound of guitarist Steve Cropper and organist Booker T. Jones jamming, thrusting and parrying, in space, floating untethered to earthy Memphis, as its core.

So Below offers an alternate journey to a lush, fused trip-hop and rock, psychedelic jungle, especially its eleven minute title track, a musical beehive with bass, electronics, and percussion buzzing in every direction. It also demonstrates blues and trance influences, but much differently from Moroccoland.

"I Wish I Was in Heaven Sitting Down" carves up backwoods gutbucket blues with wicked slide guitar, and crackles from its country twang and edgy, nervous blue vocal; Rivard hammers the repetitive bass line into a pulsating vamp, and tosses then serves it all in a syrupy psychedelic mix: alt-rock jam-band country-blues. Its foundational guitar riff gives "As Above" an electric blues sound, too, which quite mischievously frames the dialogue between turntablist DJ Logic, pianist Medeski and Dolsi-naa Abubakari Lunna, a master drummer from Ghana.

Parts one and two of "Trace Meeting" swing from Rivard's bass fulcrum and play back into his trance-fixiation. Staccato drums establish the beat, but almost none of the other instruments sound tied to it, especially the keyboards that wriggle into corners of Chick Corea complexity, and horns that sporadically whiz past like onrushing traffic.

"Our music is about surrender and giving into something more powerful than one's self, and, as corny as it sounds, really feeling love for your brothers," Rivard once said. "Certainly life is a lot more complicated than the simple ways of us musicians, but if our little musical brotherhood can embrace different beliefs, then maybe it's possible for such cooperation to exist in society at large."