BY JOHN KELMAN
February 2, 2008
Sign in to view read count 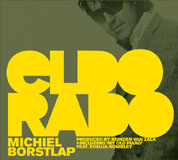 From rendering fusion super group Weather Report in an all-acoustic setting on Body Acoustic (Universal, 2005) to in-the-moment duets with drummer Bill Bruford, Dutch keyboardist Michiel Borstlap has few, if any, limits. Gramercy Park (Universal, 1999) was a remarkable set of acoustic and electric music that tackled classical repertoire, jazz standards and spontaneous composition. On Eldorado, Borstlap delivers an electrifyingly groove-happy set that picks up where Herbie Hancock's mid-1970s albums like Man- Child (Columbia, 1975) and later albums like Dis Is Da Drum (Mercury, 1994) left off.

Borstlap channels Hancock from the first notes of the seriously funky "Hubbah" where, despite its simple changes, Borstlap's heavily effected electric piano takes things slightly out, creating a nervous tension and bristling energy. "Hubbah" segues into the similarly grooved "Happy Mummy" where, like Hancock, Borstlap proves there's a place for acoustic piano amidst programmed beats, synthesized sounds and vocal vamps.

But it's not all about Hancock; Borstlap references other influences, including a hint of Chick Corea's Spanish predilections on "Cherish Your Sunshine." But with co-producer/co-writer Reinder Van Zalk's programming, it goes places even the broadminded Corea has yet to go. Bassist Boudewijn Lucas is a key component of this and all other tracks with the exception of "Hubbah" and "Happy Mummy," doing some channeling of his own with some very Jaco-ish playing on "Cherish." Borstlap's falsetto vocals, the occasional pianistic outburst, and Van Zalk's astute editing create a synchronous collage of groove and texture, form with room for free expression built in.

While it's possible to grab individual tracks for attention—the high energy "Pretty Baby," the scratch-heavy and occasionally horn- driven "Jambition," the greasy "Café Van Leeuwen," or the relentless pulse of "Deja-Vu"—Eldorado is an album meant to be absorbed in one sitting—or one set in a dance club. Borstlap and Van Zalk clearly understand pacing; following the one-two punch of "Hubbah" and "Happy Mummy," "Café Van Leeuwen" maintains the funk but drops the pace, while "Saturn" is a piece of trance-inducting electronica, filled with processed beats, looped electric piano and Borstlap's definitive inside/outside, classically informed but jazz harmonized acoustic piano.

That the reference points for Eldorado are worn so happily on Borstlap's sleeve is exactly what gives the album its distinction. They're undeniable, but so, too, is Borstlap's own multifaceted approach which, when combined with Van Zalk's detailed work, is unmistakable. Atmospherics and a European focus featured with actress Verane Pick's monologue on "Oh Look..The..The..The" give the album its own complexion, as does Xenia Meuer's operatic vocal on the romantic classicism of "The Music We Are," which segues into the futuristic, beat- heavy "The Music We'll Be," where orchestral ambience is retained but moved onto the dance floor.

It's rare for an album to be booty shaking, resonant and deeply intelligent, but Borstlap does it all on Eldorado. It won't appeal to purists, but it's sure to find an audience unafraid to find adventurous improvisation integrated within a carefully constructed weave of rhythm and sonics.