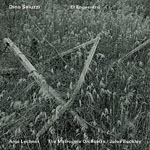 Since first emerging on the ECM label in 1983, Argentinean bandoneonist/composer Dino Saluzzi has demonstrated that even the most ethnic of instruments needn't be stylistically pigeonholed. From the solo recital of Kultrum (1983) and unorthodox improvisational pairing with Norwegian drummer Jon Christensen on 2005's Senderos, to the all-star grouping of 1986's Once upon a time—Far away in the south, affectionate, chamber jazz setting of Responsorium (2003) and outgoing, family-driven Dino Saluzzi Group's Juan Condori (2006), the bandoneonist has proven, time and again, that it's possible to revere tradition while, at the same time, expanding greatly upon it.

A parallel path on a second Kultrum (1998)—this time in collaboration with the renowned Rosamunde Quatett—and the bandoneonist's intimate duo with its stunning cellist, Anja Lechner, for the critically acclaimed Ojos Negros (2007), have explored a personal nexus of Argentinean folk tradition and contemporary classicism. El Encuentro, Saluzzi's first live recording, expands on its antecedents both in scope and palette. With Lechner and brother/saxophonist Felix Saluzzi as featured co-soloists, El Encuentro represents the bandoneonist's first encounter with Netherlands' Metropole Orchestra, a fluid musical collective heard recently on guitarist John Scofield's retrospectively focused 54 (EmArcy, 2010), and El Viento (ACT, 2009), also featuring 54 composer/arranger/conductor Vince Mendoza, but this time in a set of flamenco-influenced orchestral music.

In Javier Migistris' extensive liner notes, a single quote from Saluzzi is key in understanding the bandoneonist's compositional approach: "A lot can be told with few elements...The piece should not be too rational; it has to brim with innocence." Saluzzi's orchestrations may, at times, be sweeping, as they are on the opening "Vals de los dias," but they're never saccharine or melodramatic. Instead, Julian Buckley conducts this strings-only subset of the larger Metropole family through music that both whispers with gossamer delicacy and asserts a more powerful dynamic stance counterpoint, as Saluzzi and Lechner solo with a deep connection honed through performances including a sublime recital at Germany's Enjoy Jazz 2009 Festival. As the orchestra dissolves, leaving space for a duo of supreme calm and care-driven lyricism half-way through the piece, Saluzzi and Lechner's empathy crystallizes into a thing of such profound and breathtaking beauty that when the bandoneonist himself fades to black, it leaves a void for Lechner to explore with palpable melancholy.

"Plegaria Andina" turns more pensive still, the two Saluzzi brothers engaging in a minor-keyed duo that seamlessly leads to a hovering trio with Lechner, the orchestra only entering halfway, but retaining the composition's inherently impressionistic introspection. The title track turns more direct; a more boldly sweeping composition that nevertheless relies on the nuances of its soloists—cello and violin—to create a dramatic arc that builds to a propulsive, contrapuntal finale. It's a climax that sets the pace for "Miserere," with Saluzzi delivering a career-defining solo and fitting closer to El Encuentro, whose grander ambitions work hand-in-hand with unerring intimacy for Saluzzi's most expansive and successful marriage of folklore and classicism to date.